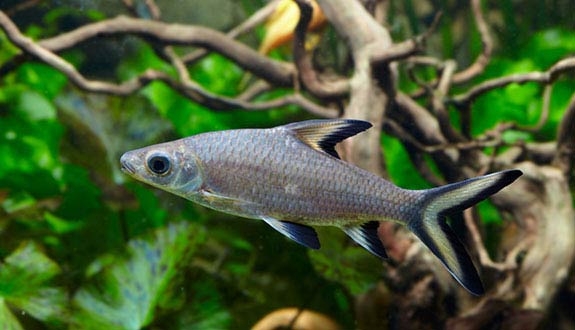 How to feed the Bala shark?

How to feed the Bala shark?

The Bala shark is an omnivore. It is easy to feed and you will be able to alternate between classic dry food, live or frozen prey (tubifex type, bloodworms), and fresh vegetables (particularly appreciates spinach!).

What kind of behavior does the Bala shark have?

What kind of behavior does the Bala shark have?

In spite of its name "shark", this bearded whale has good social skills.

It has a lively temperament and is also a good swimmer. It likes to stand and swim in the current. He will preferably be positioned in the upper part of the aquarium, near the filter's discharge.

Who can live with the Bala shark?

Who can live with the Bala shark?

Gregarius, this fish must imperatively be kept in a group (it is unfortunately rarely the case...). The lack of congeners can stress it so much that it can become aggressive. It is also prone to panic attacks. Avoid this kind of torture and keep them at least in groups of 8 specimens.

If kept in good conditions, it has a very good character and is perfectly peaceful. Given its size, this fact deserves special mention! In this case, there are no restrictions on cohabitation, apart from natural predation on small fish.

How to breed the Bala shark?

How to breed the Bala shark?

Which aquarium for the Bala shark?

Which aquarium for the Bala shark?

Start with a large aquarium of at least 1000L / 220 imp gal / 265 US gal (ideally 1500L / 330 imp gal / 400 US gal). In reality, the more space there is, the more peaceful your protégés will be. Indeed, they can stress if they feel too cramped. They will then start banging against the walls, jumping, etc... This kind of behaviour can appear years later (may be encouraged by sexual maturity).

Large roots sprinkled with sturdy plants will form an ideal setting in the centre of the aquarium. Be careful that this arrangement leaves enough room for the most important thing: swimming! Complete this decor with robust plants on the bottom and sides of the aquarium.

For the floor, choose sand and pebbles.

Bala shark are good jumpers. Therefore, it is important to cover their aquarium and protect the lighting gallery.

Its metallic colour, streamlined body and black-rimmed fins give it the appearance of a shark, from which it takes its name. However, this is only true in its youth, as it becomes much rounder as it gets older.

It is classified in the list of endangered species in their natural environment. However, the fish offered in shops are born in captivity.

Some people support the theory that "fish only grow according to the space available in the aquarium, so they will remain small". This is true, but in reality they will suffer from dwarfism, a real torture for these fish. They will suffer from internal malformations and their quality of life will be very poor. Eventually they will die prematurely because of that. If you can't get a 1000/1500 litre (220/265 imp gal - 330/400 US gal) aquarium, don't choose this species. There are many other adapted species that you might like! As for the Balantiocheilos, we suggest that you go and admire them at the public aquarium nearest you!