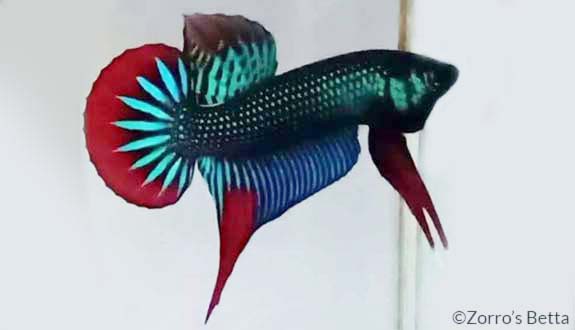 How to feed the Peaceful betta?

How to feed the Peaceful betta?

The carnivorous nature of the Betta imbellis must be taken into account in order to feed them well, and more precisely its insectivorous tendency. Moreover, most of the imbellis will not accept the foods classically proposed in aquariums (granules, flakes...).

For his basic diet, propose live prey (ideal) or frozen prey. On the menu: daphnia (red daphnia improve the colour of the fish!), aselles, grammars and mosquito larvae. These foods are ideal because they do not cause digestive problems or obesity.

Supplement occasionally with artemia, bloodworms and tubifex. You will only feed this type of prey a maximum of twice a week as they are fatty and heavy foods. Nevertheless, they can contribute to the variety of the diet, which encourages good health and beautiful colouring of your fish.

What kind of behavior does the Peaceful betta have?

What kind of behavior does the Peaceful betta have?

Like all representatives of the Betta family, the Imbellis are shy by nature. However, they are quite territorial and although in most cases they will avoid fighting, they can become aggressive with other fish that violate their territory (even killing them in some cases). Note that they will be particularly territorial during the breeding season.

Contrary to selected Betta Splendens, cohabitation between males is possible in aquariums from 100 L / 22 Imp Gal / 26 US Gal. A group of females will have to be added to them.

Who can live with the Peaceful betta?

Who can live with the Peaceful betta?

The presence of MicroFish reassures the Betta. Indeed, if this small group is peaceful and serene, there is nothing to fear! No predators in the area... You have the choice of species among the MicroFish: Boraras, Microdevario kubotai, Danio margaritatus...

Groundfish are also possible, preferably from Asian biotope. For example, you can add Kuhlli to them in an aquarium of more than 100 L / 22 Imp Gal / 26 US Gal.

As for shrimps, you can keep them with Betta as long as they have been introduced into the tank before the fish and have many hiding places (dense vegetation).

How to breed the Peaceful betta?

How to breed the Peaceful betta?

Betta spawning is fairly easy to trigger. The growth of the fry is more delicate but remains accessible to passionate amateurs.

In case you don't especially want to keep all the fry, leave them in the main aquarium with the other fish. You will occasionally have a few young survivors if the aquarium is mature and densely planted. If, on the other hand, you want to keep as many young fish as possible, you can take them out of the main aquarium and put them in a breeding aquarium (without contact with the air). Another alternative is to have your fish laid in a breeding aquarium and remove them after hatching. To do this, prepare an aquarium as follows:
- no current
- fresh and acidic water
- many plants: will be used for the visual isolation of the couple
- surface plants: they will be used as supports for the bubble nest.

Choose a nice male and female. After a period of adaptation, the male ready to reproduce will build a nest of bubbles. Once this one is finished, the courtship ritual begins. The male will then show his beautiful colours to the female, swim at full speed to show his vitality and "dance" frantically around her.

Once things are over, the couple will position themselves under the nest to mate. The eggs are released in the open water during spawning, and the eggs will fall gently onto the substrate. The male will collect his eggs and place them in his bubble nest. It then becomes white and opaque, a sign that it contains an oviposition. The male usually takes care of the eggs alone by ventilating them, but exceptions occur depending on the character of the fish. Indeed, either the female is chased away immediately after mating (if the male is too violent with her, do not hesitate to remove her from the aquarium to preserve her), or she is accepted by the male to help him in his task.

After hatching, remove the parents. The newly born fry are very small, measuring only a few millimetres. You will find them swimming just below the surface of the water.

You will have to feed the Betta fry several times a day, in small quantities. You can give them chopped tubifex, daphnia, microworm or a little bit of artemia nauplia (be careful because they are salty and can cause digestion problems. To be used as a supplement, not as a basic diet). When youngsters are 5 or 6 months old, they can switch to the same diet as adults.

The formation of the Labyrinth (secondary breathing organ) is a critical time in the growth of all Osphronemidae, and the first breath of this type can be fatal. To limit mortality, close the rearing aquarium tightly and cover it well. This will prevent draughts and allow the ambient air to approach the water temperature, as it is ultimately the temperature difference that is dangerous for the young fish. After this critical moment, your fish are saved and you have just successfully reproduced!

Which aquarium for the Peaceful betta?

Which aquarium for the Peaceful betta?

Given their natural habitat (flooded holes, ditches, flooded fields, ponds...), the water must be as calm as possible in an aquarium in Combattant (see no current at all). This is especially true in the upper part of the aquarium, where the Betta spend most of their time. The LowTech technique is therefore perfectly suited to the Bettas.

To feel safe, the Imbellis need the presence of many plants, especially floating plants. Typically, install a thick layer of plants over the entire surface (a mixture of floating and Egeria, Cerato, Hydrocotyle that you will let float) and cover the back of the aquarium with plants that provide hiding places for other fish. The front planting can be lower, with Anubias or Microsorum on supports such as roots for example.

The Imbellis has a maze. It is an additional respiratory organ that allows it to breathe surface air when oxygen is too scarce in the water. This feature, common to all Osphronemidae, is due to the characteristics of their natural environment: they live in stagnant water, puddles and ditches.

There are variants of this fish: Fantail, Penang, Ko Samui (endangered variety).