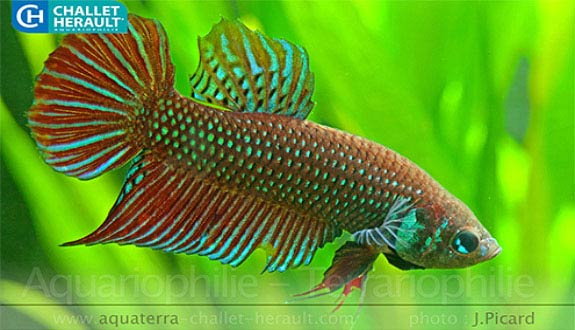 How to feed the Betta mahachai?

How to feed the Betta mahachai?

Betta mahachai are carnivorous and especially insectivorous. They do not accept dry foods that are traditionally offered in aquariums. Their feeding must imperatively and only be composed of small preys thawed, or better, live food:
- - Every day: mosquito larvae, daphnia, aselles and grammars (these foods do not cause obesity or digestive problems). Red daphnids improve the color of the fish!
- - 2 times a week maximum: bloodworms, brine shrimp, tubifex (these foods are quite fat and heavy, do not overdo it!).

What kind of behavior does the Betta mahachai have?

What kind of behavior does the Betta mahachai have?

Betta mahachaiensis are territorial fish but remain rather shy. They do not seek to fight but are quite capable of killing other fish that would come to annoy them on their territory, especially during the breeding season. It is quite conceivable in a volume from a hundred liters to maintain several males together with a group of female (22 Imp Gal or 26 US Gal).

Who can live with the Betta mahachai?

Who can live with the Betta mahachai?

The presence of MicroFish (Microdevario kubotai, Boraras, Danio margaritatus...) reassures the Betta: if small fish are present and serene, it means that there is no predator in the vicinity.

In volumes from 100 liters (22 Imp Gal or 26 US Gal), you can make them coexist with Asian bottom fish like Kuhlii. The maintenance with shrimp is also possible, provided that they are introduced before the fish in a tray. The aquarium should in this case be filled with hiding places.

How to breed the Betta mahachai?

How to breed the Betta mahachai?

The triggering of the breeding of Betta mahachai is very simple. On the other hand, raising the young fish is more delicate but remains within the reach of all with good preparation.

To obtain the spawning of your fish, it is necessary to begin by offering them a way of life which corresponds to them and in which it feels good. Indeed, a happy fish is a fish prone to breed! The breeding aquarium should have no current, its water will be rather sweet and acid, and you will have installed many plants, especially on the surface (see "its aquarium"). Indeed, the plants on the surface will serve as a support for the manufacture of a nest of bubbles. The rest of the vegetation will be used for the isolation that the couple needs if other fish are present.

A male ready to breed will build a nest of bubbles on the surface, between the floating plants. Once this task is completed, it will start a love parade with a female: it will swim very quickly to show its vivacity, show its beautiful colors or a "dance" of swimming on the spot and wriggling fins.

If things go well, the couple will be under the nest of bubbles to mate. The egg is released in open water and will settle on the ground. The male will pick them up and gather them in the nest of bubbles, and will start to ventilate them. From that moment, and according to the character of the male, the female can be either hunted or accepted to help the male in its task. If the male is harassing and hunting the female with too much violence, remove it from the breeding aquarium to preserve it. You will notice the presence of the eggs because the nest of bubbles becomes white and opaque. At hatching, the tiny fry of a few millimeters swim on the surface. 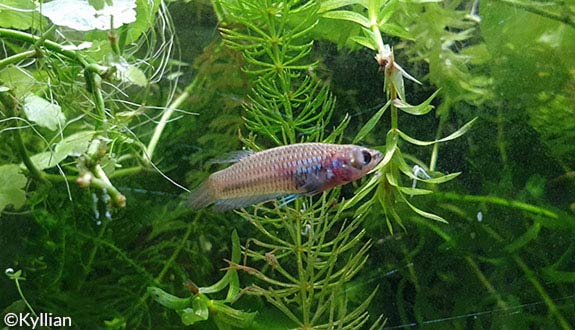 If you do not want to do any particular breeding, leave the young fish with the other fish. Nature will do its work but if the aquarium is well planted and mature, some will survive (they know how to hide and they eat microfauna).

If instead you want to keep a maximum of fry, you can take them delicately (without removing them from the water) to place them in breeding aquarium. Feed them with small live prey such as tubifex, microvers, daphnia or Artemia nauplii (watch out for these because they are salty and can cause digestive problems, so distribute sparingly). Meals will be distributed several times a day in small quantities. After the first 5 or 6 months, young fish will be able to adopt the same diet as their parents.

The most critical moment of young Betta's growth is the formation of the labyrinth, the secondary breathing organ. Indeed, as for the breeding of all Osphronemidae, it is the most difficult stage. To avoid losses, cover the breeding aquarium well from the beginning and close it as tightly as possible. The goal is to minimize air drafts during the first months. Past this course, and without large maintenance gaps, young fish are saved. Congratulations!

Which aquarium for the Betta mahachai?

Which aquarium for the Betta mahachai? 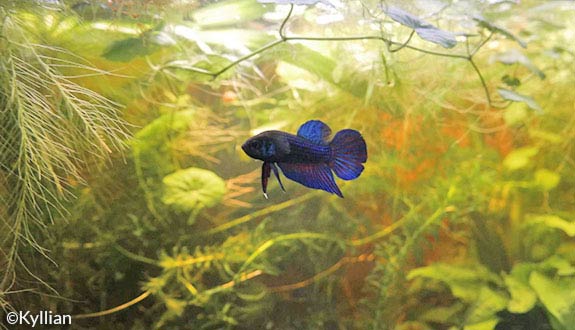 For its maintenance in captivity under good conditions, it is necessary to take into account certain parameters. Thus, the ideal aquarium for Betta mahachai is common to the majority of Osphronemidae: many, many plants, especially on the surface and a very weak current or nonexistent. The technique of LowTech is therefore quite for the Bettas.

It will be necessary to ensure sufficient vegetation to allow the couple to isolate themselves if necessary. Typically, install a thick layer of plant over the entire surface (mix of floating and Egeria, Cerato, Hydrocotyle that you will float) and cover the back of the aquarium with plants providing hiding places for other fish. Planting on the front may be lower, with Anubias or Microsorum on supports such as roots for example.

Like all Osphronemidae, this Betta has a complementary respiratory organ. Indeed, during its growth, it develops a labyrinth, which allows it to breathe the surface air when oxygen is too rare in the water. This capacity is due to the characteristics of its natural environment: this fish lives in stagnant water, puddles and ditches.

You will be able to admire different color variants in the Betta mahachaiensis: