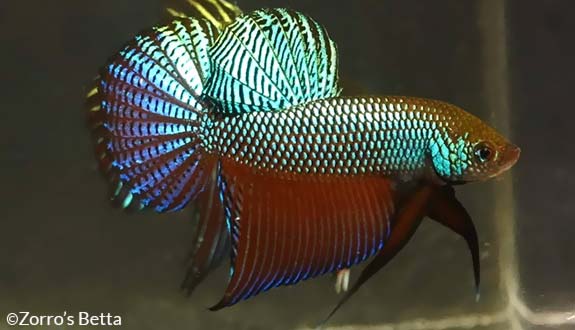 A big thank you to Kyllian!

The coloration of the male is more pronounced than that of the female. His fins are also more developed.

How to feed the Emerald betta?

How to feed the Emerald betta?

These fish are carnivorous and mainly insectivorous. The Betta smaragdina refuses classic freeze-dried food (granules, flakes...) and will only feed on live or frozen prey (with a preference for live food). You can start on a daily diet based on mosquito larvae, daphnia (red daphnia improve the colour of the fish!), aselles and grammars. These foods are ideal for Betta because they do not cause obesity or digestion problems. Supplement with bloodworms, artemia or tubifex twice a week. You should limit the distribution of this type of food as it is very fatty and heavy. They are therefore a good occasional supplement but will not be part of the daily diet.

What kind of behavior does the Emerald betta have?

What kind of behavior does the Emerald betta have?

Like all Betta, the Smaragdina are quite shy. However, they remain territorial and even if they don't look for a fight, they can attack (or even kill) other fish that are a little too intrusive. This behaviour is particularly true during the breeding season.

From 100 L / 22 Imp Gal / 26 US Gal upwards, you can envisage the cohabitation of several males with a group of females.

Who can live with the Emerald betta?

Who can live with the Emerald betta?

The ideal roommates will be all species of MicroFish such as the Microdevario kubotai, Boraras, Danio margaritatus for example. Indeed, their presence reassures the Betta: if this small troop is present and calm, it is because there is no predator in the area!

For larger volumes (from 100 L / 22 Imp Gal / 26 US Gal), you can consider cohabitation with Asian groundfish (Kuhlii for example).

For an association with shrimps, it is possible provided that the aquarium has many hiding places, and that the invertebrates were introduced before the Betta.

How to breed the Emerald betta?

How to breed the Emerald betta?

The reproduction of Betta smaragdina can be done with a good preparation. Spawning is fairly easy to obtain. It is more the breeding of the young that can be a problem.

If you don't particularly want to breed, let nature do it and let the breeding take place in your main aquarium. Note that if your aquarium is mature and well planted, some young will survive because they hide and eat microfauna. If, on the contrary, you want to keep as many fry as possible, you can either delicately remove them (without taking them out of the water) from the main aquarium to place them in a breeding aquarium, or prepare a breeding aquarium adapted to the species:
- no current
- fresh and acidic water
- many plants: will be used for the visual isolation of the couple
- surface plants: they will be used as supports for the bubble nest.

Introduce your breeding Betta in this aquarium. After a more or less long adaptation period, the male will make a nest of bubbles among the surface plants. Once finished, he will move on to the love parade. This consists of showing off his beautiful colours, swimming very quickly to see how lively he is and "dancing" by wriggling his fins.

If all goes well, the male and female will position themselves under the nest to mate. During spawning, the eggs are released in the open water. The eggs sink and settle to the ground. The male will then retrieve the eggs one by one and place them in the bubble nest. He will also start to monitor and ventilate them from that moment on. For the female, there are two possibilities: either the male accepts his help, or he will chase her away sometimes violently. If you find the male too aggressive, remove the female to preserve her.

Once the eggs are placed in the bubble nest, it becomes opaque and white. At birth, the fry are very small (a few millimetres) and swim below the surface.

The young Betta's meals will be distributed several times a day in small quantities. Feeding the fry:
- tubifex
- daphnia
- microvers
- artemia nauplia (beware of the latter as they are salty and can cause digestion problems. Distribute with caution)

After the first 5 or 6 months, the young fish will be able to adopt the same diet as their parents.

As with all Osphronemidae, the critical moment in the growth of the Smaragdina is the formation of their labyrinth, the secondary breathing organ. To limit losses due to this critical moment, cover their aquarium well and close it as tightly as possible from the start. This will limit draughts and the temperature of the ambient air will approach that of the water. Once this is done, and without major maintenance, the youngsters are saved. Well done!

Which aquarium for the Emerald betta?

Which aquarium for the Emerald betta? 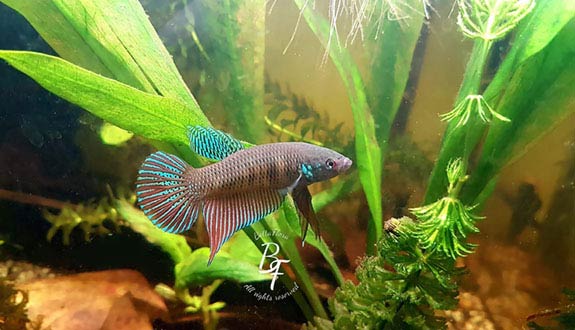 Their natural environments are flooded holes, ditches, flooded fields or ponds for example. The water is constantly stagnant.

Thus, it is advisable in aquariums to respect 2 essential conditions for the well-being of all Betta: very low or no current, and a lot of plants. As these fish live most of the time just below the surface, these parameters are particularly true in this area of the aquarium. The LowTech technique is therefore very suitable for Betta fish.

Typically, install a thick layer of plant material over the entire surface (a mixture of floating and Egeria, Cerato, Hydrocotyle which you will let float) and cover the back of the aquarium with plants providing hiding places for other fish. The front planting can be lower, with Anubias or Microsorum on supports such as roots for example. 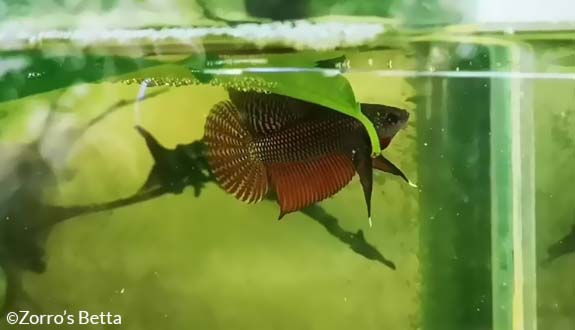 Like all members of the Osphronemidae family, this species develops an additional respiratory organ. Indeed, these fish have a maze, which allows them to breathe surface air when oxygen is too scarce in the water. This ability is due to the characteristics of their natural environment: they live in stagnant water, puddles and ditches.

Several color variations are possible with this Betta :