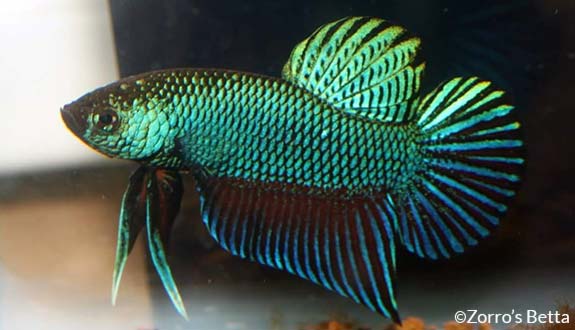 How to feed the Stiktos Betta?

How to feed the Stiktos Betta?

Like all Betta, Stiktos are carnivorous fish with insectivorous tendencies. Many specimens refuse traditional flakes or pellets, which are not very suitable for their diet anyway.

To do the right thing, offer them live prey, but if not, frozen prey also works. On the menu: daphnia (red daphnia improve the colour of the fish!), grammars, aselles and mosquito larvae. This type of food is well adapted to Betta because it does not cause obesity or digestion problems.

From time to time (max. 2 times a week), vary with vase worms, tubifex or artemia nauplias. Be careful though because it is heavy and fat, so the distribution must be occasional, for a change!

What kind of behavior does the Stiktos Betta have?

What kind of behavior does the Stiktos Betta have?

Generally speaking, this Betta is quite shy. However, it remains an Osphronemidae and therefore has the territorial character that goes with it! Thus, even if it is not particularly belligerent, this fish will defend its territory against fish too intrusive to its taste. It can be particularly virulent during the reproduction period.

In volumes starting at 100 litres, you can quite easily keep several males together with a small group of females.

Who can live with the Stiktos Betta?

Who can live with the Stiktos Betta?

To reassure your Betta, the presence of MicroFish is ideal because it is said that if these small fish are calm and serene, no predators are to be feared! You can therefore choose Danio margaritatus, Boraras or Microdevario kubotai to name but a few.

From 100 L / 22 Imp Gal / 26 US Gal upwards, cohabitation with Asian groundfish is possible. The kuhlli, for example, will make good roommates.

Finally, note that association with invertebrates such as shrimp is possible under two conditions: that they have been put in the aquarium before the Betta and that they have many hiding places.

How to breed the Stiktos Betta?

How to breed the Stiktos Betta?

The reproduction of the Betta is not very difficult. It is rather to bring the fry to adulthood that can be more delicate. Generally speaking, Stiktos reproduction is possible for all amateurs.

You will probably have spontaneous reproductions if males and females are present. If you do not particularly wish to breed, leave the fry in the main aquarium and nature will do its work (it is possible, however, that a few clever little ones will manage to survive in a mature, densely planted aquarium). Conversely, if you are interested in breeding and want to keep as many young as possible, you can either collect them after hatching and isolate them in a separate aquarium to protect them from predation, or you can have them spawn in a specially designed aquarium and remove them afterwards. In this case you will need an aquarium with :
- fresh and acidic water
- power failure
- many plants: will be used for the visual isolation of the couple
- surface plants: they will be used as supports for the bubble nest.

Install your couple of Betta in this tray and let them get used to it quietly. Once the male is ready to breed, he will build a bubble nest on the surface among the plants. Once his nest is finished, he will start to conquer the female, all colours and fins outdoors. After the courtship ritual, the couple will position themselves under the nest to mate. The eggs are laid on the ground, then the male gathers the eggs one by one in the nest of bubbles. From then on, he will constantly monitor them and maintain them by ventilating them. As for the female, she is either chased away by the male immediately after laying, or is tolerated: it depends on the character of the male. If you notice that the female is being mistreated by the male, do not hesitate to remove it from the breeding tank to preserve it.

The nest, which now contains the eggs, becomes opaque and white. When they hatch, the tiny fry swim below the surface. You can then remove the male.

Bettas fry need to eat several times a day. Distribute a small amount:
- daphnia
- microvers
- tubifex
- artemia nauplies (beware they are salty and can cause digestive problems). Distribute with caution).

After 5 or 6 months, switch to the same diet as adults.

The most difficult moment of growth is the formation of the labyrinth, the secondary breathing organ.

This is a delicate stage and youngsters can die at the first breath of this type, especially if the temperature difference between the water and the air is too great. To avoid this, close the breeding aquarium tightly and cover it well. This will prevent draughts and an increase in the ambient temperature. If the young survive this stage, you can consider them as saved (except for large maintenance gaps of course) and reproduction as successful!

Which aquarium for the Stiktos Betta?

Which aquarium for the Stiktos Betta? 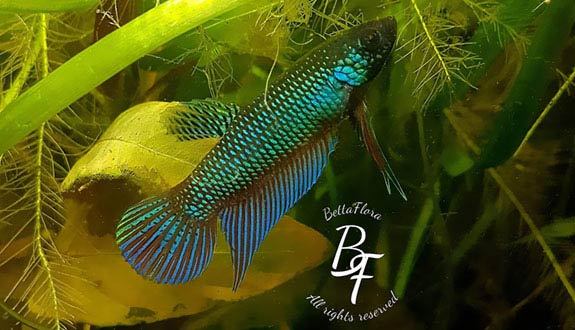 The Betta live naturally in stagnant waters with very little oxygen. They are found in flooded fields or holes, ditches or ponds. For maintenance in captivity, an aquarium with very little or no current will be required. The LowTech technique is therefore very suitable for Betta.

To reassure this shy species and allow it to build a nest of bubbles (see "reproduction"), plant its aquarium abundantly. Typically, install a thick layer of plant over the entire surface (a mixture of floating and Egeria, Cerato, Hydrocotyle which you will let float) and cover the back of the aquarium with plants providing hiding places for other fish. The front planting can be lower, with Anubias or Microsorum on supports such as roots for example. 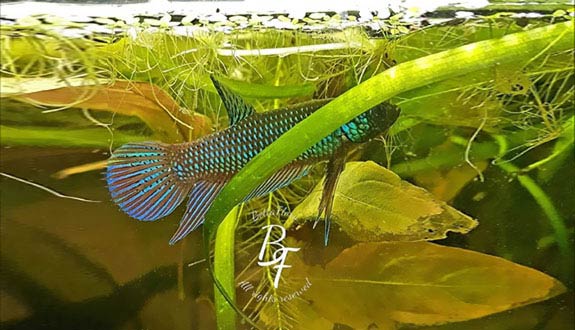 The labyrinth is a complementary respiratory organ that the Osphronemidae develop to cope with their difficult living conditions in the natural environment. Indeed, the stagnant waters in which they evolve are poorly oxygenated. Thus, these fish are able to breathe surface air when oxygen is too scarce in the water.