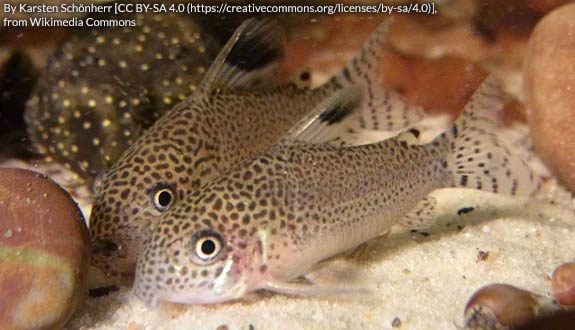 Not very apparent. The male is slightly smaller (-5 mm) and slimmer than the female

This fish is omnivorous with a detritivore tendency. It will accept all the foods that will be offered to him. Make contributions in plants (cucumber, zucchini, poached or boiled spinach, peas...) and live or frozen prey (bloodworms, mosquito larvae...). Prefer to give him its daily ration in two meals: morning and evening.

Its first characteristic is of course its highly developed gregarious instinct. The Corydoras Punctatus must therefore live in a shoal of several individuals. Regarding this point, it is estimated that:
group of 6 to 8 individuals: strict minimum
group of 9 to 13 individuals: correct viability
group of more than 14 individuals: behavior similar to natural

Indeed, in the wild, the Corydoras live in a shoal of several hundred members! Note that 3 or 4 fish do not form a shoal, count rather 6 individuals minimum. If it is alone or with too few of its peers, it becomes stressed and this makes it quite susceptible to diseases.

Peaceful and calm, it is a bottom fish that likes to swim in the middle part of the aquarium where there is more current or along the windows of the aquarium. However, from time to time, it sometimes leaves this area at full speed to swallow a bubble of air on the surface.

A community aquarium is accepted (it ignores the other occupants of the aquarium).

However, do not combine them with other gregarious bottom fish, except in very large aquariums. Cohabitation with a common Pleco (30 cm or 12 inches!) Is also to be avoided because it shares the same area of life and it can accidentally hurt a small Corydoras. Attention also to the predation of big fish.

Choose very quiet roommates because Corydoras are easily intimidated by species that are too bright or too big. It cohabits easily with the other fish of the Amazonian biotope living in the same geographical area as him, such as the Ember Tetra will make perfect roommates.

The breeding of Corydoras Punctatus is possible in aquarium. The optimum age for breeding your corydoras is around 3/4 years old. Note that the older a female is, the higher the thickness of the eggs. They are thus more resistant and have a better chance of success, considerably increasing the number of fry. Before this age, you can get some fry all the same. If you want to make your corydoras breed, you understand the importance of installing them from the beginning in a suitable and well maintained aquarium, in order for them to live as long as possible, for a regular and successful breeding in quantity and in quality! You can provide a group of several males for 1 female.

The breeding aquarium (50 L / 11 Imp Gal / 13 US Gal) will have a small filter, a soft light, a temperature around 24/28°C 75/82°F and a ph at 6/7. Prepare the parents for spawning by feeding them with live or frozen prey (like mud-worms). Finally, a good water change with cooler and softer water should do the rest. Remove the parents and lower the water level once the laying is complete.

For more safety, you can treat eggs with methylene blue. 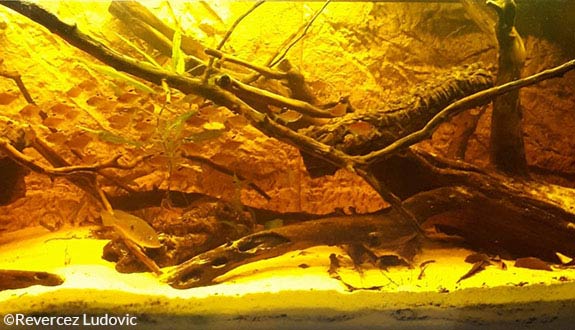 Corydoras punctatus has no scales, which makes it particularly sensitive to salt, chemicals and drugs. This also requires maintenance, clean water and stabilized parameters (do not introduce Corydoras in immature aquariums). IT IS NOT RECOMMENDED TO PUT FERTILIZER in a container containing Corydoras. If you notice signs of stress, such as fast breathing and then lethargy (stay still, sometimes near the surface), immediately change 50% of the water (provide a good water conditioner). Be careful, the new water must have the same parameters as the tank, including the temperature. If you isolate your sick fish, it may wilt even faster. Try to stick the hospital tray to the main aquarium so that the sick Corydoras can see its congeners. 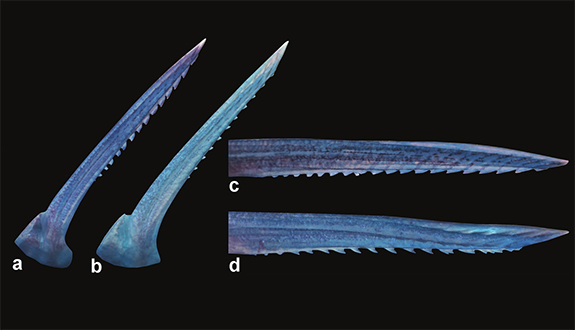 This species of Corydoras is not very widespread in aquariums. It is often confused with C.julii, C.leopardus and C.trilineatus.