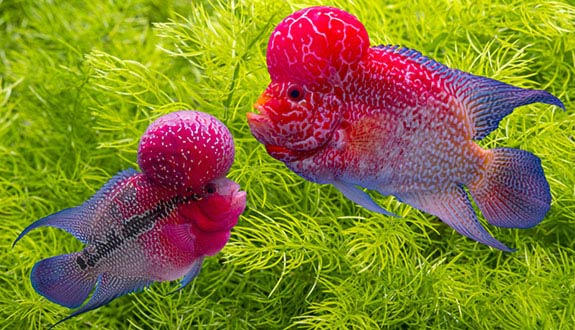 When adult, the male has a bigger nuchal bump than the female

How to feed the Flowerhorn?

How to feed the Flowerhorn?

To be in shape, this large Cichlid needs a varied and lively food as often as possible. A good diet also promotes the coloring of your fish.

You will be able to donate earthworms, mealworm suckers (beetles) or hive tinea (caterpillars). Other amateurs distribute Guppy alive but we are not a fan of this practice, it remains however a solution to mention (attention to the health of the live fish that you give to eat to your Flowerhorn).

You can also offer frozen food (which you would of course defrost before feeding), the same fish as human use (freshwater fish).

Finally, dry foods will be accepted as supplements to the basic diet. There are large pellets designed for cichlids that will fit perfectly, and even «special flowerhorn» foods.

Make sure that the proposed food is big enough so that the fish sees it!

What kind of behavior does the Flowerhorn have?

What kind of behavior does the Flowerhorn have?

The Flowerhorn is a large, aggressive fish (like many species created directly by humans). As any Cichlid, it is also territorial.

It spends most of its day between two activities: swimming in the water and digging the substrate.

If your fish changes colour, especially if they darken, this can be a sign of a problem: stress, poor water quality, injury or illness. Take a look at these factors to find out what’s wrong with your fish.

Who can live with the Flowerhorn?

Who can live with the Flowerhorn?

It is recommended to maintain only one individual per aquarium. If you want to have more (couple), plan a very large aquarium (at least 600 liters / 132 imp gal / 158 US gal) decorated with structure, to allow each fish to delimit its territory. In any case, do not keep more than 3 Flowerhorns in the same aquarium, and never 2 males together.

Given its size, all fish smaller than it will serve as a meal, so most species... The roommates of the Flowerhorn need, then, to be big enough, able to defend themselves and fast enough. Thus, the Plecos are conceivable, just like the Jaguar Cichlids or the Black Pacu.

We warmly recommend the maintenance of this fish in a specific aquarium and alone.

How to breed the Flowerhorn?

How to breed the Flowerhorn? 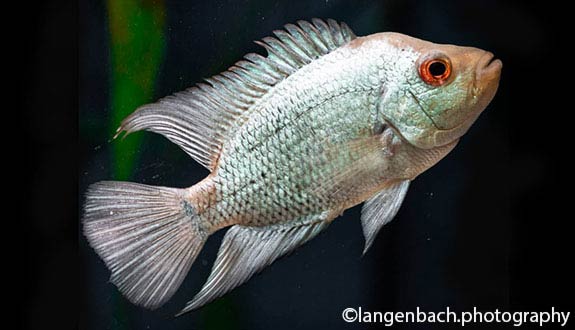 The breeding of the Flowerhorn is possible in aquarium. The fish are mature when they reach 10/12 cm (4-5 inches). Females tend to have orange belly when they are ready to breed. Note that a Flowerhorn female will lay eggs every month, even without the presence of a male.

The female lays eggs and takes care of the eggs while the male hunts possible intruders. However, if the female is stressed or disturbed, it will start eating its eggs. It is therefore important that their environment be quiet and that your breeding fish be in good health.

Constantly monitor the level of aggressiveness of the male, who can at each stage of the process turn against the female. If things go too far, you will have to separate them to make the female lay in an aquarium, then present them to the male for fertilization if it accepts. The hatching occurs in 3 or 4 days. Interestingly, parents will move the offspring to places they feel are more secure.

Which aquarium for the Flowerhorn?

Which aquarium for the Flowerhorn?

Even if it is a sturdy fish, avoid the parameter variations of its water because it makes the Flowerhorn susceptible to diseases. It is also advisable to be careful about the use of medicines: read the warnings in the package leaflet before using them.

The Flowerhorn is a big polluter. To maintain a sufficient water cleanliness, choose a powerful filtration (external preferably because it is more efficient and will leave more space in the aquarium) and regularly make good water changes. However, do not subject your fish to a strong current. A moderate current will be more suitable. If you find that the current is too great, you can «break» it by directing the filter outlet to one of the walls of the tank. Be careful when cleaning your aquarium because the Flowerhorn can be aggressive with you too!

For the substrate, opt for a good layer of fine gravel. For more naturalness, also install rocks and roots, paying attention to the stability of your setting. Indeed, the Flowerhorn is strong enough and it could bring down the scenery and hurt itself. Finally, plant a few feet of strong plants (such as large Anubias for example), which you root deeply. In general, the decoration should not occupy the whole place because the Flowerhorn needs a lot of space to swim.

The Flowerhorn is actually a hybrid species of the family Cichlidae created voluntarily by humans in 1993. It comes from crossing Amphilophus citrinellus and Cichlasoma trimaculatum. This fish does not exist in the nature.

It takes its name «Flowerhorn» from the shape of its head called «horn of flower». This hump is called the nuchal bump.

This species is found mainly in Asia, the United States and more rarely in Europe. Note that their importation is prohibited in Australia.

In Asia, this Cichlide is considered to bring good luck to its owners according to Feng Shui. We also believe that the bigger the bump, the happier the fish 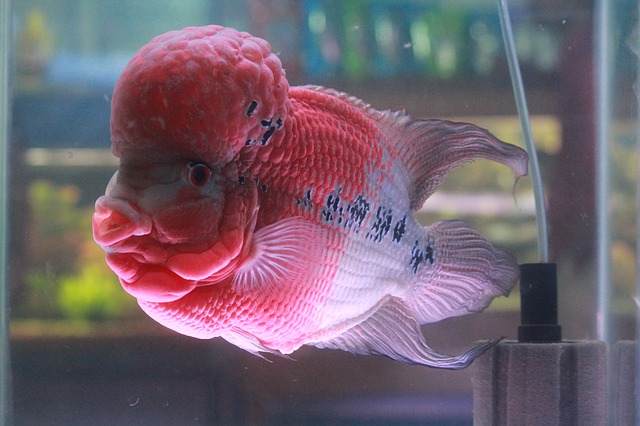