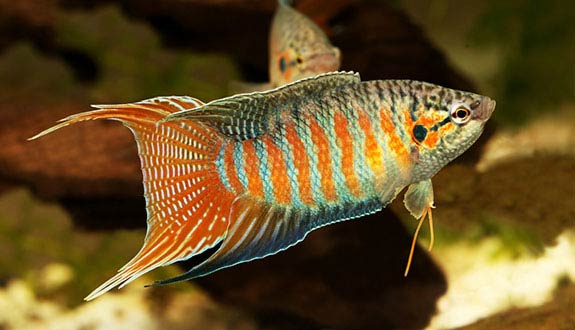 The male is bigger and more colourful than the female. It has elongated fins

How to feed the Paradise fish?

How to feed the Paradise fish?

This fish must be fed mainly with live prey: tubifex, bloodworms, daphnia, artemia, mosquito larvae... It will also eat small aquatic snails, hydra and planar. You can still give it dry foods (granules, glitter...) that it will easily accept. Do not hesitate to supplement its diet with vegetables.

What kind of behavior does the Paradise fish have?

What kind of behavior does the Paradise fish have?

It is smarter than many other fishes. For example, it can recognise its owner and even eat in his hand.

Despite its calm and quiet pace (although it is rather sharp for an Osphronemidae), this fish hides a strong character!

The Chinese fighting fish will become very aggressive during the breeding season.

Who can live with the Paradise fish?

Who can live with the Paradise fish?

A specific aquarium is preferable. Indeed, it is a fish with a very bad sociability. It is temperamental and can be particularly aggressive towards poorly-chosen aquarium companions: the little ones will be eaten and the big ones dominated! So you have to be very careful about your roommates because it’s really a delicate point.

To begin, avoid keeping two Chinese fighting fish males in the same aquarium or you will see them fight (behavior identical to that of its cousin Betta Splendens). You will instead make a harem of 1 male and 2/3 females so that the male does not exhaust a single female by its incessant pursuits.

It is a very good predator that will attack fish and fry smaller than 4/5 cm or 1.5/2 inches. As for the fish bigger than him, it will stand up to them in most cases. In general, it is imperative to avoid associating with the paradise fish other territorial species of open water.

It will be a little more tolerant with non-territorial fish. You can add small fish of 5/6 cm or 2/2.3 inches but beware of them if they approach too close to the nest during the breeding season!

How to breed the Paradise fish?

How to breed the Paradise fish?

Spontaneous breedings are quite frequent. Note that in some cases, a couple can stay togheter for life, like small cichlids. If a spawn is successful, do not separate the partners. The ideal parameters for breeding are a temperature at 23°C or 73°F, pH at 7 and hardness at 10°dGH.

In breeding season (hot season), the male will force on its colours and will become really beautiful. It will also develop extreme aggression and it will be best to isolate the couple in a specific aquarium to protect other fish from the community aquarium. Indeed, even if everything went well so far, the male Chinese fighting fish can decimate your entire population in one night to protect its nest.

It will make a short court to the female and will then undertake the construction of a bubble nest on the surface. It is therefore necessary to avoid an excessive surface current which could destroy the nest. Spawning occurs with brutality.

After the laying, the male shows its «good dad» side and keeps only the eggs and the fry. It will gather them in the nest, watch over them, and vigorously remove any intruder, and even its female. Well... in theory! Many exceptions have been reported where the female also helps the male in this task. Monitor the couple’s behavior and interactions to determine the best time to remove the female from the bin.

The fry must be sorted and separated as they are developed so that the older ones do not eat the smaller ones.

Which aquarium for the Paradise fish?

Which aquarium for the Paradise fish?

It is not very demanding with water parameters except for the temperature, which should never exceed 25°C or 77°F (and that’s already a lot). It can therefore live perfectly (and it is even recommended) in an unheated aquarium placed in a temperate room.

A dense vegetation will be necessary for its well being, as well as the presence of floating plants like Riccia, Pistia or Salvinia. These plants will naturally shade the aquarium which will remind the original living conditions of this fish. To give it enough room to swim, place your plants on the periphery of the aquarium. For more natural, also install roots.

It is able to jump out of its aquarium: remember to put a lid!

The Paradise fish do not like strong currents. You can reduce the current coming out of the filter by directing the rejection of the pump against one of the walls of the tank.

Thanks to its great adaptability and robustness, it can spend its summer vacation in an outdoor pond, where it will delight with mosquito larvae! This ability to eat a lot of mosquito larvae has been exploited to fight against malaria for example, like the Guppy. Some sources state that they can even live all year round in an outdoor pond in an area where the temperature does not drop below 0°C or 32°F.

It is very strong and will only rarely get sick in the aquarium (which does not mean that you do not have to take care of him!).

It has a labyrinth, a complementary respiratory organ that serves to absorb oxygen in the ambient air. This ability allows it to survive in very low oxygenated waters.

It owes its name to the two black spots on its covers.

There are different coloured varieties of this species: albino, blue, Concolor, Chinensis.

Historical anecdote: particularly robust, the Macropode supported trips by boat. Thus it was the first «tropical» fish to have been introduced in Europe (around the year 1800)!

The Paradise Fish is available in many different shapes and colors: