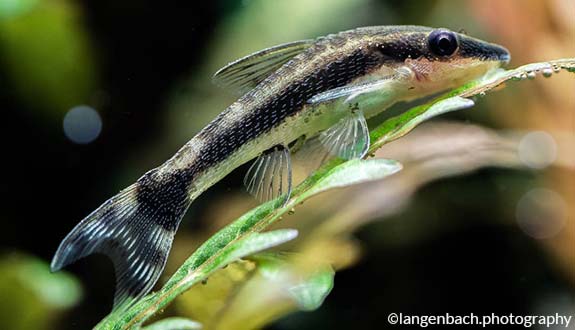 The male is thinner, unlike the more plump and larger female

How to feed the Golden otocinclus?

How to feed the Golden otocinclus?

The Macrotocinclus affinis is a vegetarian fish with a preference for algae. And they are well known from aquarists due to this very useful feature! Note, however, that Otocinclus eat only young and recent algae. They will not be able to get rid of all the algae, especially if your aquarium is infested on their arrival (the algae are then older and less interesting to our little grazers). Be that as it may, never buy these fish just for their alga eater function. They will never replace the intervention of the aquarist and have needs that must be filled, like every living thing. Do not neglect these small fish so endearing!

Even though they mainly feed on the algae of your aquarium, they may not find enough to eat well. You must complete this natural diet. For example, you can distribute raw or boiled vegetables (spinach, salad, zucchini, cucumber...). To keep the vegetables at the bottom of the tank during feeding (the area where Otocinclus will feed), prick the pieces at the end of a long stem.

You can also give them bottom pellets (ideally based on spirulina) that you will find easily on the market.

What kind of behavior does the Golden otocinclus have?

What kind of behavior does the Golden otocinclus have? 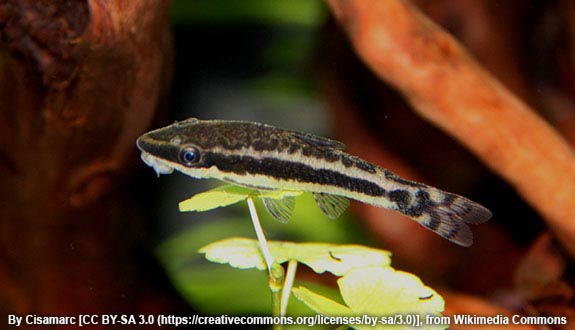 This fish will spend most of its existence deep in the aquarium.

It will spend a good part of the day hidden in the scenery. In the evening, it will begin to activate on the leaves or windows of your aquarium. Indeed, it lives mainly at night (it will be more appropriate to distribute its food just before the lights off in the middle of the day).

The Otocinclus is very peaceful.

Who can live with the Golden otocinclus?

Who can live with the Golden otocinclus?

With a gregarious nature, the Otocinclus absolutely needs the presence of its congeners to feel good in your aquarium. Count a shoal of 6 individuals minimum. If they feel good, they will scatter indifferently in the aquarium. If they are stressed, they will tend to remain grouped (we can however note this tendency to regroup in normal situations such as feeding).

As for the other inhabitants of the aquarium, it will ignore them completely! Thus, it will be a perfect companion for surface fish, dwarf cichlids and even shrimp (which it will not attack, even the juveniles)! You can also add Corydoras with them, but beware of food competition in this case. Indeed, these fish will cohabit in the same area of life: the bottom of the tank. When distributing food, the Corydoras will often be the first to arrive! So make sure your little Otocinclus have their ration too! (For example, you can distribute the daily ration at several places in the aquarium).

Watch out for other ground-fish such as Plecos or Ancistrus. The Otocinclus are quite small and they could be attacked or jostled by the two behemoths, not to mention the terrible food competition to which they would be subjected! Cohabitation with these two species is to be avoided.

The last restriction of cohabitation is due to the shy nature of the Otocinclus. Indeed, they will be easily frightened and stressed by large fish, by those who are agitated, or by aggressive species.

How to breed the Golden otocinclus?

How to breed the Golden otocinclus?

On paper, the breeding of the Macrotocinclus affinis seems very simple, but will prove very rare in the aquarium.

Prepare a small aquarium (at least 50 liters / 11 imp Gal / 13 Us Gal) with a small filter and some potted plants.

While observing your fish, locate a couple and install it in the breeding aquarium (to differentiate the sex, the male will be thinner than the female who will be more plumper and bigger). Make a water change with slightly cooler water (about two degrees Celsius lower) to trigger spawning.

After spawning, the female will lay up to 50 eggs. You will see them stick to the vegetation and the walls of the aquarium. The fry will come out of the eggs after 3 days. You will not be invaded by the number of births because unfortunately many fry do not survive very long.

Which aquarium for the Golden otocinclus?

Which aquarium for the Golden otocinclus?

As with most ground-fish, it is a good idea to opt for a nutritious soil, covered with river sand. Indeed, a non-cutting ground will not hurt the small otodontes of Otocinclus.

The Otocinclus loves densely planted aquariums, with lots of hiding places, and wooden roots on which it sits.

For the parameters, provide a pH of 6.5 / 7 and a gH of 10 in the ideal. Otocinclus are quite sensitive to variations in parameters as well as to water quality. Be sure to make regular water changes and stabilise the settings. Note that they appreciate a medium brewing.

Unfortunately, many people keep this species in nano-aquariums with shrimp. However, this type of maintenance is not suitable because even if this fish is small, it needs space to satisfy its «researcher» instinct for food. Besides, it moves often!

Small curiosity: this fish has no scales, but a kind of bone shell.

Despite its small size, its longevity is amazing: about 10 years!

Do not introduce Otocinclus until 3 or 4 months after filling a new aquarium. In fact, the water parameters must be very stable, and the aquarium must contain a small stock of seaweed!