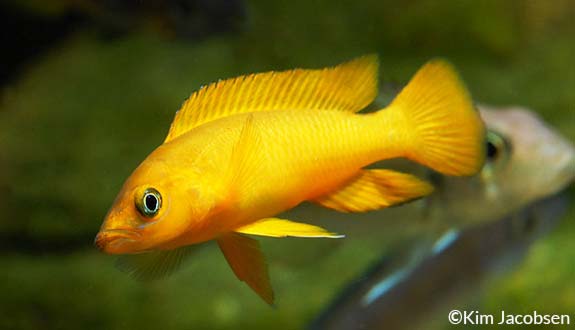 How to feed the Leleupi?

How to feed the Leleupi?

The Lemon Cichlid is a carnivorous fish (in nature, it feeds on crustaceans and invertebrates). In captivity, its basic diet will consist of live or frozen meat prey (Artemia, Daphnia, Cyclops, Asel, Gammaria...). You can observe it scraping the seaweed decor because it also needs a vegetal part in its diet. The granules or flakes of spirulina will do very well for the plant part. Note that its diet will remain mostly carnivorous.

From time to time you can give them freeze-dried food for convenience.

What kind of behavior does the Leleupi have?

What kind of behavior does the Leleupi have?

They have a lively and active temperament!

Like any cichlid, it fiercely defends its territory against its rivals of the same species. Moreover, in its natural environment, it is a solitary fish. It does not really have a good character and it is very aggressive with its fellow congeners, especially the males between them. Females are a little more respectful (except during the breeding season when they defend their young). The dominant male can also hunt females that are too intrusive. The group is not really welded, they are very independent fish and clashes are common.

To facilitate the coexistence of Lemon Cichlids between them, it will be necessary that all the fish of the group are introduced young and at the same moment in the aquarium. Any attempt to introduce a new Lemon Cichlid into an aquarium that already has one is fatally doomed to failure and will end in the death of the newcomer in a few days. In terms of volume, you can build your Lemon Cichlid populations as follows:
– 100 liters or 22 Imp Gal or 26 US Gal: couple (be careful, it must be a couple clearly identified as such)
– 200 liters or 44 Imp Gal or 53 US Gal: harem of a male for three females
– 800 liters or 176 Imp Gal or 211 US Gal, and over: group of 6 to 8 individuals

Lemon Cichlids live in the caves and crevices of the rocky landscape. From time to time they will move away from their territory and their hiding places. Note that they do not dig sand like other cichlids do.

Who can live with the Leleupi?

Who can live with the Leleupi?

Fairly tolerant with other species, you can add other small cichlids from the Lake Tanganyika. For more comfort, choose species that have other living spaces, and that will not be living in rocks like the Lemon Cichlid.

Here are some suggestions: Julidochromis, Cyprichromis, Altolamprologus. Avoid association with Mbunas. Remember that the larger your aquarium, the better the cohabitation will be, because the fish can easily juxtapose their territories. Your population will be closely related to your volume, especially with these territorial species!

How to breed the Leleupi?

How to breed the Leleupi?

Some aquarists will succeed in breeding with the first attempt, where others will never succeed.

This is due to the particular mores of these fish. Indeed, in their natural environment, males roam from cave to cave and breed with any receptive female encountered. Thus, they do not form stable couples.

And this is the difficulty for aquarists who usually have only a few fish, and sometimes there is incompatibility of mood between them...

Note that even pairs of fish that spawn are not really united.

For starters, as you will understand, attempts to breed a selected pair will fail. Indeed, it does not correspond to their breeding habits. The best is to have a small group of 5 to 8 young individuals (in 800 liters or 176 Imp Gal or 211 US Gal at least) and let the hierarchy do the rest (watch however aggression between males). Normally, your aquarium has many hiding places, caves, faults, holes... in which the female Lemon Cichlid will lay. Otherwise, you can also add large empty snail shells.

This context is much closer to that found in nature and generally gives good results: fish will breed as soon as sexual maturity is reached.

Which aquarium for the Leleupi?

Which aquarium for the Leleupi?

The Lemon Cichlid lives naturally in the depths of the Lake Tanganyika, at the edge of rocky and sandy areas. At this place, the water is very stable, which is why the Lemon Cichlid is quite sensitive to the quality of its water. It must be irreproachable. For this, use good filtration and make water changes regularly (at 15% of the total volume each week, or 30% every two weeks). Pay particular attention to the fact that the parameters of the new water are the same as the water of the aquarium because the Lemon Cichlid does not support variations.

Install many rocks forming piles and separate territories, but they must be equivalent in terms of surface, number of caves and hiding places... This will help the group to settle harmoniously. For the soil, sand will be perfect. 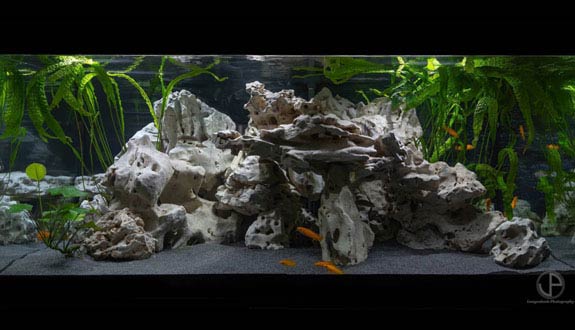 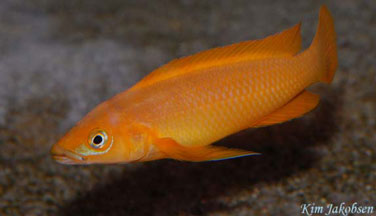 Note that it is very close physically to Neolamprologus longior which is however a species apart. The latter is slender.

Its color can vary from brilliant yellow to orange depending on mood. Other factors may also affect coloring: diet and health.

In the wild, even though Lemon Cichlids are predominantly yellow-dominated, they sometimes meet with other color variants such as beige, gray, black, or brown. This characteristic manifests itself independently of the geographical area (this variant even appears within the same siblings). As for the natural livery, we can distribute the colors according to the geography:

• Kabogo Color: creamy white body and bright yellow fins. Also has yellow irregular spots around the eyes and on the covers 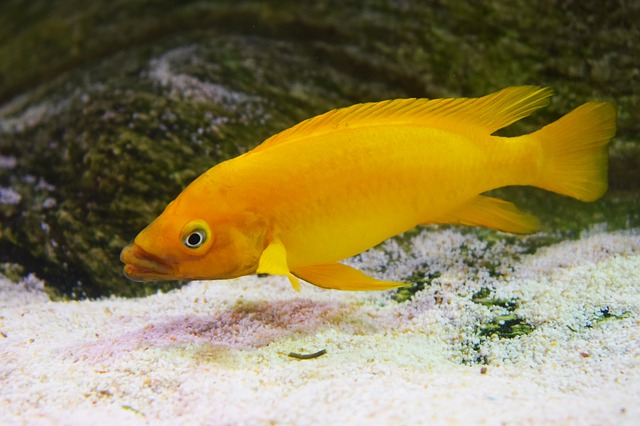