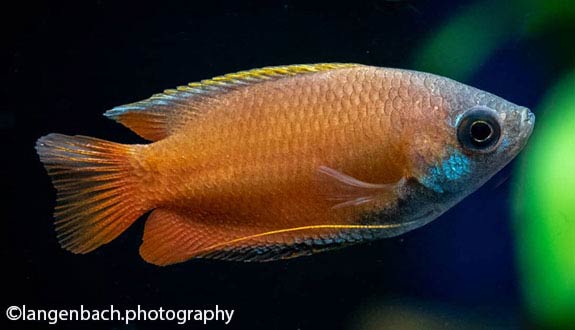 Many thanks to Kyllian!

For unselected specimens: the female is gray/brown with a darker liseret. The male is red/orange with yellow dorsal fin, and black head. For the selected specimens sexing is almost impossible.

How to feed the Honey gourami?

How to feed the Honey gourami?

Gouramis are omnivorous with carnivorous tendencies and especially insectivores. Their diet may consist of flakes or pellets for carnivorous fish (although even of good quality they usually contain no more than 40% protein). Fill in with live prey (daphnids, bloodworms, artemia, etc...) or in frozen form.

What kind of behavior does the Honey gourami have?

What kind of behavior does the Honey gourami have?

The Honey Gourami are among the most timid and the most calm of their kind, but they remain territorial fishes, which, unaccompanied, are quite capable of decimating a complete population in a very short time, individuals of their species included.

Who can live with the Honey gourami?

Who can live with the Honey gourami?

As seen above, the Honey Gourami are shy but territorial fish, so the choice of their roommates must be thought very carefully.

The cohabitation with other species must be done in an aquarium of 80 L (17 imp gal / 21 US gal) or more, it will be necessary to choose species living in similar biotopes (no current, a lot of plant...) but especially small quiet species. Let us mention the Danio margaritatus, the Microdevario kubotai or even the fish of the genus Boraras (brigittae, urophthalmoides, maculatus, merah...). The Kuhlii are also a very good option for the bottom of the aquarium.

We will avoid at all costs fish too bright, too big, too colourful or even not sharing the same parameters of the biotope (as the Amazonian fishes for example, like Corydoras).

From 80 L (17 imp gal / 21 US gal), it is possible to maintain a harem. Be careful, do not keep Gouramis in trio: the male will choose a female and the other will be harassed by the couple in the vast majority of cases, sometimes until death.

Cohabitation with shrimp works in some cases, the shrimp must imperatively be in the aquarium for a few months already, have begun to breed and have found many hiding places.

How to breed the Honey gourami?

How to breed the Honey gourami?

The breeding of the Honey Gourami is very simple, raising young is more complicated but remains within reach of all with preparation. Care must be taken to have good maintenance to trigger spawning, no current, fresh and acidic water and a very important plant cover on the surface that will serve as support for the nest of bubbles and which will isolate the male visually from other fish.

Once the male has built his nest of bubbles and found a female (after a parade ritual that can take many forms: swimming very quickly to show its vivacity, arching to show its colours, static swimming and wriggling fins...), the duo will be placed under the nest of bubbles to mate. Depending on the character of the male, the female will be hunted or accepted to watch the eggs with him. If the female is harassed too much after spawning, remove it from the vat in order to preserve it, the male may be very violent towards the female.

Once the female has laid, the male will collect the eggs at the bottom of the aquarium to put them in its nest of bubbles and begin to ventilate them. You can not miss the eggs: the nest bubbles turn white and opaque. Once hatched, small fry of a few millimeters wander on the surface.

If you do not particularly want to keep the fry, leave them in the aquarium with the parents. Without particular actions and with a strong vegetation, some will survive by hiding and consuming the micro fauna present in the tank.

If you want to keep a maximum of fry, put them in a separate breeding tank and feed them several times a day with small live prey such as small daphnids, small worms, tubifex or nauplies. Artemia (only in small quantities because they are salty and cause digestive problems). At the age of 5 to 6 months, children can consume the same diet as parents.

The formation of the labyrinth, organ of secondary breathing, is like at all the Osphronemidae the critical period of the breeding of the young people. Cover the tray well and avoid the drafts of air during the first months of life of young Gourami.

Which aquarium for the Honey gourami?

Which aquarium for the Honey gourami? 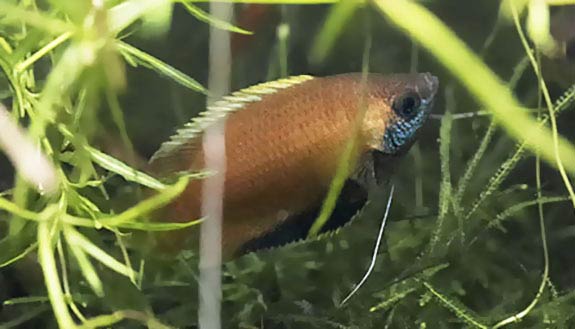 The ideal aquarium of the Honey Gourami is common to the majority of Osphronemiseae: many, many plants, especially on the surface and a very weak or non-existent current. The technique of LowTech is therefore quite good for the Gourami.

For a couple in a 60 L (13 imp gal / 16 US gal) aquarium, fill the aquarium with plants. The male must be able to isolate itself visually when it protects its nest of bubbles and the female must be able to isolate itself from the male sometimes a little too demanding or aggressive when it protects its offspring (everything works visually: if I do not see you, you’re not there).

For aquariums from 80 L (17 imp gal / 21 US gal), opt for a planting called «C», a thick carpet of plant about ten centimeters over the entire surface (mixture of floating and Egeria, Cerato, Hydrocotyle that is allowed float) and a plant covering the back of the aquarium providing hiding places for other fish. Planting on the front may be lower, with Anubias or Microsorum on supports such as roots for example.

The yellow Honey Gourami found in all stores are specimens from human selection. This selection makes their sexing very difficult, the sexual dimorphism being completely attenuated by the selection, for which we often see people with two males who fight themselves on the first days, with at best a separation and in the worst a dead fish. 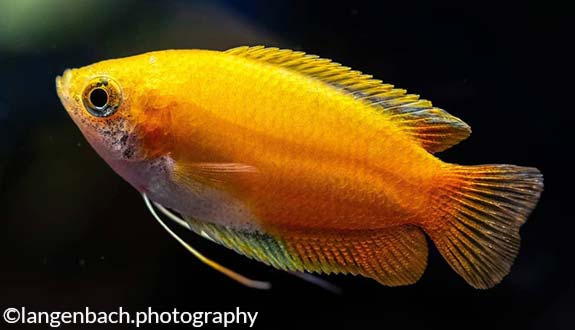 We advise you greatly, although they are more difficult to find, to take unselected Honey Gouramis, having kept their wild colours: yellow border on the bodice, body red / orange, head and ventral fins black for the male and gray / brown with a deeper band in the middle of the body for females. This difference makes sexing very easy and avoids conflicts afterwards. 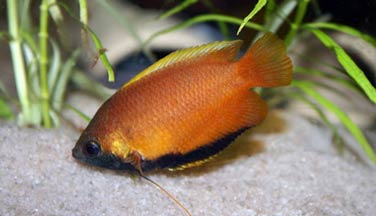 Do not hesitate to insist that your pet store order this form of Gourami from its supplier (the selected varieties represent 95% of the specimens born in captivity).