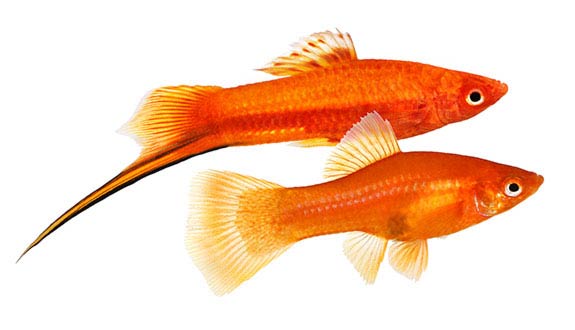 Easily recognizable: the tail of the male ends with the shape of a sword

How to feed the Green swordtail?

How to feed the Green swordtail?

Omnivorous fish, very easily accepting all forms of food. Dry foods such as flakes or granules are accepted. To avoid deficiencies, vary its diet with fresh or frozen food (crustaceans, insects, worms).

Watch out for overfeeding because this fish always seems to be hungry. Moreover, as it eats a lot, it is a big polluter (needs very frequent water changes).

What kind of behavior does the Green swordtail have?

What kind of behavior does the Green swordtail have?

The Green Swordtail is lively, very dynamic and never ceases to be active.

As for all fish in this family, it will be necessary to introduce 1 male for at least 3 females. Indeed, males are very ardent and could quickly exhaust a single female. It is therefore necessary to plan to divide its attention on several females.

Males are aggressive to each other and the pursuits are daily. It is very important that there is enough space in the aquarium if you plan to cohabit several males together.

Who can live with the Green swordtail?

Who can live with the Green swordtail?

The Green Swordtail will find its place in a community aquarium easily. In fact, it simply ignores the other occupants of the aquarium!

However, be careful with the association with species too quiet, timid or shy, because the strong activity and temperament of the Green Swordtail could stress them.

Avoid also cohabitations with Platys or Guppies because there are risks of hybridization. Fry resulting from these crossings are often poorly formed and fragile.

How to breed the Green swordtail?

How to breed the Green swordtail?

The breeding of Xiphophorus Hellerii is one of the easiest in aquarium hobby!

Indeed, it will occur spontaneously when both sexes are involved in an aquarium. Breeding is frequent and the fry survival rate quite high, making it a particularly prolific species.

A temperature around 26°C or 79°F and a pH of 7.5 are the ideal parameters for breeding.

To parade, the male Green Swordtail realizes seduction movements to the female. When mating, it will fertilize the female with its gonopod. Interestingly, a single mating may be enough to give 3 to 5 litters (depending on the size and age of the female). Indeed, the female is able to store the sperm of the male for 3 months.

The eggs are incubated inside the female and will last between 4 and 6 weeks. The eggs will hatch directly into the belly of the female. Later, the fry expelled are already fully trained and autonomous.

Note that a single female can give birth between 20 and 120 fry, and this every 5 weeks or so. In a well-planted aquarium, most fry will survive.

Fry growth of this species is slower than other Poeciliidae. Indeed, it will take about 1 year to reach adult size.

If you want to raise the fry away from predators, do not use a nest! Instead, plan a small 60 liters (13 imp gal / 16 US gal) aquarium, exclusively for fry rearing. Equip this tank with filtration and heating. You can also put some plants. Take the pregnant female to isolate it in this aquarium until the fry are released and then remove it. Another solution is to catch the pups in the main tank to isolate them in this aquarium.

Watch out for consanguinity! Indeed, it can produce fragile fry, deformed and whose Longevity is much reduced. To avoid this, keep only the breeding adults in your aquarium, and sell / give the cubs. Another method: introduce new mature fish from time to time, either by buying them or by offering exchanges with other enthusiasts!

Which aquarium for the Green swordtail?

Which aquarium for the Green swordtail?

This species of fish is particularly dynamic. Therefore, an aquarium of at least 200 liters (44 imp gal / 53 US gal) will be needed.

The Green Swordtail is not very demanding about the parameters of its water. However, it will be more comfortable in hard water (add 1 or 2 teaspoons of salt in 10 liters / 2.2 imp gal / 2.6 US gal of water). It is not essential but if the water is too soft, the Xipho is more sensitive to diseases.

Be careful, this fish can jump out of the aquarium! Plan to always cover your aquarium so as not to find it dried on the floor of your house.

As for the decoration, do not hesitate to plant densely, while leaving enough room for swimming. Indeed, a lush vegetation will allow females to hide from insistent males.

For the maintenance, know that Green Swordtail is a big polluter. Make a water change of 15 to 25% each week. Make sure that the temperature of the new water is the same as that of the aquarium. You will also take the opportunity to siphon the bottom of your aquarium from accumulated waste.

It is common to hear that Xiphophorus Hellerii changes sex. This is not true. In fact, some males take time to manifest their sexual dimorphism. By the way, the sword-shaped tail can come overnight!

Note that these males are often taller than the others.

The green swordtail has a very variable coloring and today there is a multitude of shapes and colours: