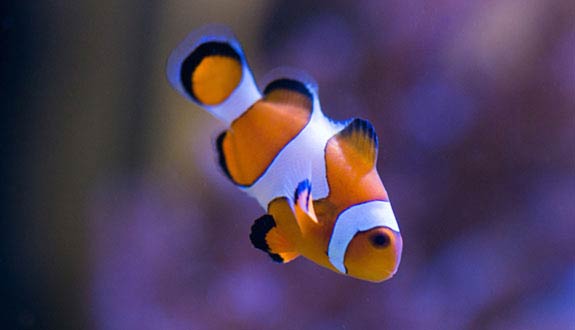 The male is significantly smaller than the female 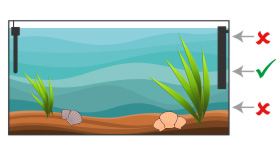 How to feed the Amphiprion?

How to feed the Amphiprion?

This fish is easy to feed. It is mainly carnivorous and appreciates live or frozen prey. It may also consume dry foods without difficulty.

Note that a varied menu will promote its color.

What kind of behavior does the Amphiprion have?

What kind of behavior does the Amphiprion have?

The clownfish is peaceful with all the fish, but is obviously very territorial with the members of its own species. It fiercely defends its anemone. Therefore, it is recommended to introduce only one pair per aquarium of at least 100 liters or 22 Imp Gal or 26 US Gal. Even if you install several anemones, it is not uncommon for the dominant pair to mistreat the other specimens, sometimes even killing them.

The couple spend most of their time between the tentacles of the anemone, but still quite active.

Who can live with the Amphiprion?

Who can live with the Amphiprion?

No restriction of particular cohabitation, except with members of its own species (see «behavior»).

How to breed the Amphiprion?

How to breed the Amphiprion?

Spawning is easy enough to obtain if the maintenance conditions are correct and if an anemone is present. Rearing fry is more sensitive.

Encourage spawning by distributing live prey such as Artemia. A change of water can also be beneficial. After the parry, if the female is consenting, the male will carefully prepare the laying surface, usually a flat surface near the anemone, while the female stays at a distance until it is ready to lay. The female then joins the male in its task.

The female deposits oocytes that the male then fertilizes. Oviposition occurs at night and comprises between 200 and 300 eggs. The freshly laid eggs are yellowish but will darken to gray during the development of the fry, until distinguishing their small eyes.

The male will maintain, ventilate and monitor the brood until hatching. The female, meanwhile, stands guard over the entire territory. Eggs hatch from 7 to 10 days after laying. Once born, pups are left on their own and parental care stops.

In order to have a chance to have some fry surviving, you can take the rock on which the brood is installed to place it in an aquarium specially dedicated to the breeding. Be careful that the eggs do not come into contact with the air.

The breeding aquarium should be of about 50 liters or 11 Imp Gal or 14 US Gal, filled with the same water as the egg tray, and can be naked, without decoration. The best time to collect the brood is when you see the fry’s eyes through the eggs, and that they turn to a silvery color. The hatching will take place around 24 hours later.

After hatching, the young clownfish have a yolk sac that serves as a food store for 24 hours. After this first day, give them very small foods at the beginning like live rotifers (Brachionus plicatilis) then as you go on to the artemia nauplii. The first 7 days are critical and losses will happen.

Moreover, despite the number of fry born, expect losses because some will be victims of other fish in case you take them after hatching, and others could die in the breeding tank, especially if you do not prepare enough live prey or if the tank is not clean enough. As a result, many aquarists consider breeding to be successful from around 20 surviving fry.

Interesting fact: it is a species with protandric hermaphroditism. Behind this complicated word lies a curiosity: all fry are males! They all have the capacity to become females but only the dominant ones and the bigger ones will succeed there. In nature, the social group is hierarchical around a single female. The female usually associates with the largest male in the group to form the dominant pair. If one day this female dies, it is the dominant male who would then turn into a female, and the second largest male would then take the place of the male who has metamorphosed. For you, this means that by buying 2 clownfish, you will necessarily have a couple.

Which aquarium for the Amphiprion?

Which aquarium for the Amphiprion? 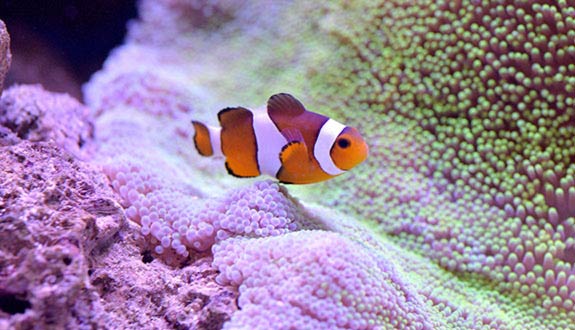 Is it necessary to specify that it is imperative for an anemone for the well-being of these little clowns? The most popular species of anemones are the genera Heteractis and Stichodactyla. They form with their anemones a symbiosis, that is to say a sustainable and mutually profitable biological association, between two living organisms. The anemone provides a safe haven for the clownfish that is safe from its predators in its stinging tentacles habitat, and for its part it feeds, cleans and protects the anemone from its own predators.

The rest of the decoration may be made of rocks and corals. A reef aquarium is therefore ideal for him.

The False clown anemonefish is a very good jumper, so remember to cover your aquarium.

Maintain a low nitrate level (less than 50 mg/L) because the clownfish is quite sensitive. Regular water changes are therefore imperative.

Unfortunately the excessive collection of individuals in its natural habitat has weakened wild groups. We encourage you to choose farmed fish instead. If you have to buy wild fish for lack of alternatives, pay special attention to the skin (it should not have black or white spots) and fins (which must be whole and healthy).

Clownfish can live in the midst of stinging tentacles of the anemone because they smear themselves with the mucus they produce to prevent their tentacles from burning together. 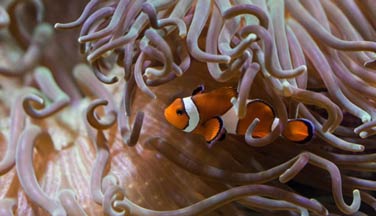 It is the most popular clownfish in our aquariums. In the same family, are also commonly found: A. akallopisos (dwarf clownfish), A. clarkii (dark amphiprion), A. ephippium (red clownfish) and A. frenatus (red clownfish).

There are dark variants of this species:

Very often mistaken for Amphiprion Percula, there are slight differences:
- Spines of the dorsal fin (spines of the fin at the top of the fish): A.percula usually has 10 dorsal spines whereas A.ocellaris has 11. Note that in rare cases A.percula may have only 9 dorsal spines and A.ocellaris only 10. In addition, the rear part of the dorsal fin is generally higher on A.ocellaris than on A.Percula.
- Black contours: A.ocellaris often has much less black outlines than their white bands. Sometimes it may seem that there is no black at all, but there is almost always at least one thin black outline adjacent to the white stripes. A.Percula, on the other hand, usually has thicker black stripes highlighting the white areas. Note that these are generalities for classic clownfish. Patterns can vary considerably from one individual to another.
- Eye color: A.Percula’s eye shows more orange color around the pupil. In contrast, A.ocellaris has more black around the pupil.

A short overview of the different possible colours of the species: 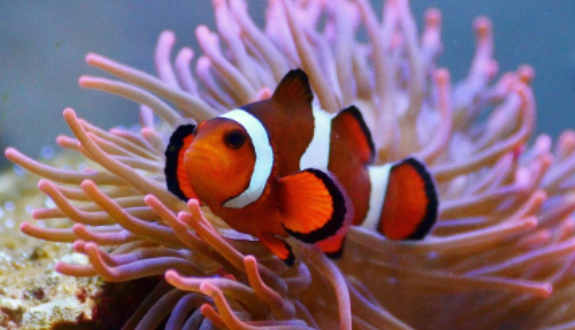 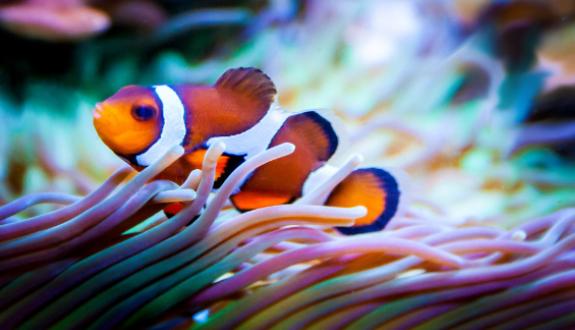 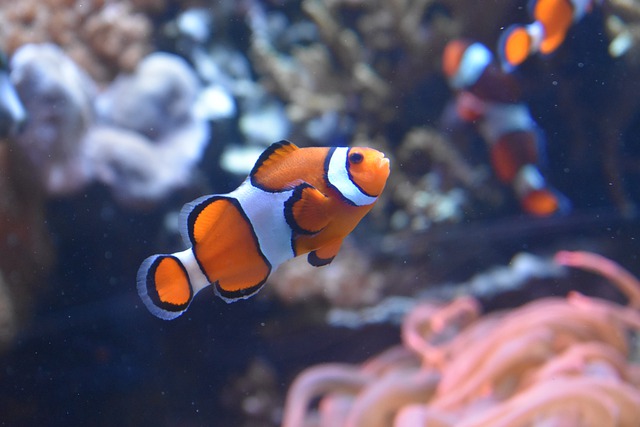