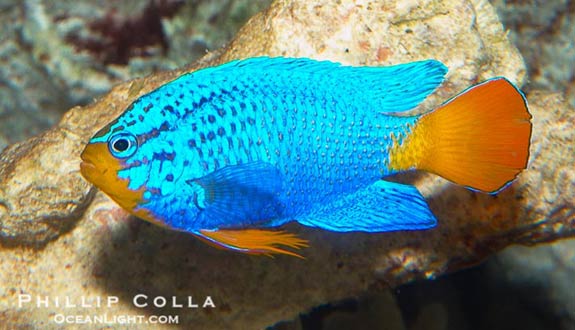 The male has pretty yellow / orange touches on the plastron and caudal. The female is fully blue with a black dot at the back of the dorsal.

How to feed the Chrysiptera?

How to feed the Chrysiptera?

The Blue damselfish is omnivorous. In the wild, it feeds on filamentous algae, tiny crustaceans and planktonic fish eggs.

In the aquarium, this species is easy to feed: dry foods, live or frozen prey.

You can go on 50% of plant foods, and 50% of meat foods. In any case, take care of the size of the proposed food because its mouth is quite small. On the vegetable side, spirulina is particularly welcome. For meat foods, you can give red daphnia, artemia enriched with vitamins, krill, mysis, cyclops, pieces of fish meat, shrimp, mussels... For better health and to avoid deficiencies, alternate different menus!

Finally, it is recommended to make several small meals a day. This rhythm will help reduce the aggressive temperament of this fish, less stressed than with a single meal a day.

What kind of behavior does the Palette Chrysiptera have?

What kind of behavior does the Chrysiptera have?

This fish is very aggressive in nature, both to its congeners and new fish introduced into the aquarium. This behavior is particularly true in males who fiercely defend their nesting grounds. This very difficult temper is considered one of the most pronounced in small marine aquarium fish. In general, females and juveniles are slightly less aggressive, while larger males may become extremely bellicose. Note that its temper becomes more difficult as it gets older.

It is a pretty lively and active fish, which swims a lot. It spends a lot of time monitoring its territory and entering / leaving its hiding places. It will animate your aquarium very well, as much by its activity as by its magnificent colors.

Who can live with the Chrysiptera?

Who can live with the Chrysiptera?

Given the aggressive and territorial nature of the Blue damselfish, never associate two representatives of this species in aquariums smaller than 600 liters or 132 Imp Gal or 158 US Gal. The cohabitation of two individuals in an aquarium too small often results in the death of one of them. This is because the territory of this fish can be quite extensive. Beyond 600 liters or 132 Imp Gal or 158 US Gal, you can begin to consider multi-maintenance. Your group will be composed in harem: a male for several females. Indeed, two males cannot live together. The ideal will be the introduction of a male and four females in an aquarium of at least 800 liters or 176 Imp Gal or 211 US Gal.

Also avoid any association with species of the genus pomacentridae and generally, with all territorial fish, too small or too peaceful (blennies, gobies, cardinal fish, fire fish, etc ...). Maintenance with tube worms and tunicates is to be avoided because they would suffer a harassment. Finally, too big fish can intimidate the Chrysiptera cyanea which would then fear a predation. It would then remain hidden, even not eating anything...

But then what is left?

You have the opportunity to associate with live fish, either non-territorial or semi-aggressive and not too big. You can for example associate it with Angelfish, Fish-globes, ballistae, representatives of the family Pseudochromidae, etc ... (pay attention to the volume of the aquarium which must of course be adapted according to the species mentioned). In short, all fish that can defend themselves! In general, this type of association works well.

Finally, Chrysiptera cyanea will not present any danger for invertebrates or corals.

How to breed the Chrysiptera?

How to breed the Chrysiptera?

Breeding is very difficult. Indeed, even if the laying is easy, raising tiny fry is particularly difficult.

Spawning occurs regularly among branched corals from 26 ° C or 79 ° F. The couple cleans the spawning support (substrate). The eggs incubate for 3 to 5 days. During this period, the male will show an even more combative temper. It will defend its territory and its eggs. Note that it also heals its eggs.

It is the rearing of fry that is problematic and especially their diet. Indeed, they are tiny. They must also be raised in a separate aquarium.

Curiosity: like its cousin the clownfish, all fry Chrysiptera cyanea are females. In time, some will become males. This phenomenon is called a successive hermaphroditism of protogynous type.

Which aquarium for the Chrysiptera?

Which aquarium for the Chrysiptera?

This fairly lively fish needs space. Choose an aquarium of at least 200 liters or 44 Imp Gal or 53 US Gal (100 cm or 40 inch front) for a single individual. The marine aquarium of this fish will be composed of rocks, algae and corals.

Make a lot of hiding places. This is one of the keys to making multi-maintenance work well. For example, you can form cavities between living rocks. Be careful however to the stability of your decor. 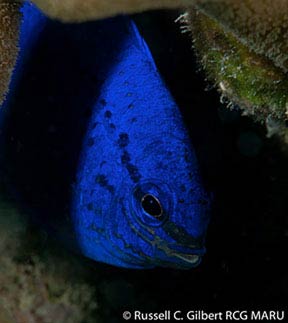 Never buy this species on a crush, or to «test the water of your aquarium» (sales argument sometimes used). You would then find yourself with a very territorial and aggressive fish, which will be difficult to associate with other species, especially if it is the first to arrive in the aquarium. We must take the situation backwards and hink about your population BEFORE your purchase: it will be composed around the Blue damselfish and its compatibilities. This requires time and research! 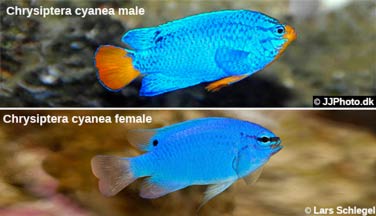 Extremely robust, it is rarely sick. Its acclimatization is also easy. A beginner in marine aquarium will be able to maintain this fish without difficulty in this field. However, it will ensure its delicate cohabitation and will associate only adapted species.

Chrysiptera cyanea can vary its colors. In case of danger for example, it will darken becoming almost black. This allows him to adjust its color according to the hiding place where it has to find refuge.

As this species is bred in captivity, make sure during your purchase that your fish is a breeding specimen and not from harvesting in the wild (it’s always better ;) ).

Its color may tarnish with time.