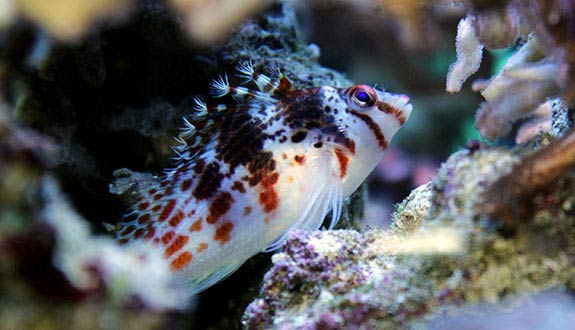 How to feed the Cirrhitichthys Falco?

How to feed the Cirrhitichthys Falco?

In the wild, this good hunter feeds on fry, shrimp and other small crustaceans.

In the aquarium, it will accept live or frozen prey (mysids, chironomid larvae, adult artemia, tubifex). Live artemia is very well consumed. Some aquarists have managed to get them to accept fish and shrimp meat after a period of adaptation. Dry foods can also be offered afterwards.

Make sure your fish feeds properly because it can easily suffer from food competition in a well-populated aquarium.

What kind of behavior does the Cirrhitichthys Falco have?

What kind of behavior does the Cirrhitichthys Falco have? 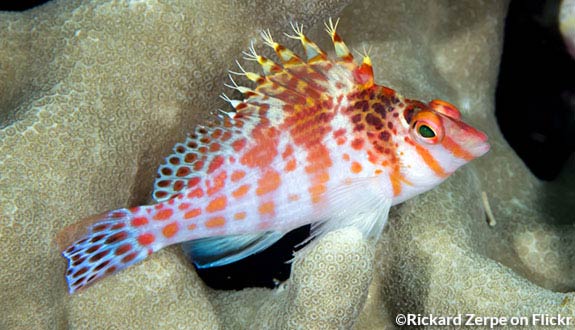 Its behavior is very interesting: it spends most of its time observing its environment from its perch. It watches for the slightest movement in its aquarium but also in the room where it is! In fact, it mainly monitors the possible prey that would pass near it.

It looks remarkably intelligent, an effect accentuated by its ever-on-the-look look.

This fish does not swim very well (it does not have a swim bladder). It moves more waddling than actually swimming, which is very fun to watch.

Who can live with the Cirrhitichthys Falco?

Who can live with the Cirrhitichthys Falco?

It may also be slightly aggressive towards small fish. This temper will be alleviated by an aquarium large enough for everyone. One exception remains: cohabitation with Gobiodons that should not be attempted in any aquarium. In fact, the dwarf hawkfish is a predator and can attack Gobiodons at the time of the meal.

It is peaceful with all other species of fish.

Watch out for maintenance with the shrimps that are its favorite prey. Even shrimp of its size will not be safe and may be victims of hawkfish.

How to breed the Cirrhitichthys Falco?

How to breed the Cirrhitichthys Falco?

Impossible to date in captivity. In its natural environment, spawning always occurs in harem and laying occurs at night.

Which aquarium for the Cirrhitichthys Falco?

Which aquarium for the Cirrhitichthys Falco?

This fish is a perfect host of the reef aquarium. Perfectly at home in a setting of rocks, algae and corals, it will appreciate the presence of an elevated promontory on which it will spend its day. It will be its stronghold of observation. It will therefore be necessary that your decoration is high enough. 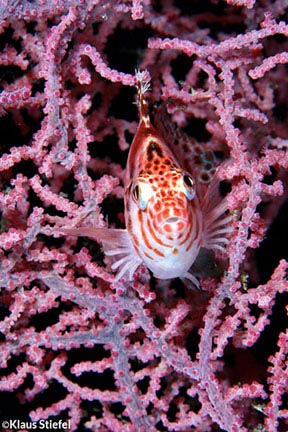 Offer it many hiding places. In case of danger, it can take refuge deep in the rocks. Branched corals will also be favored.

The dwarf hawk can potentially jump out of its tank, remember to close your aquarium and protect the lighting system.

Easy to acclimatize and quite robust, this little fish will delight aquarists starting with marine aquariums.