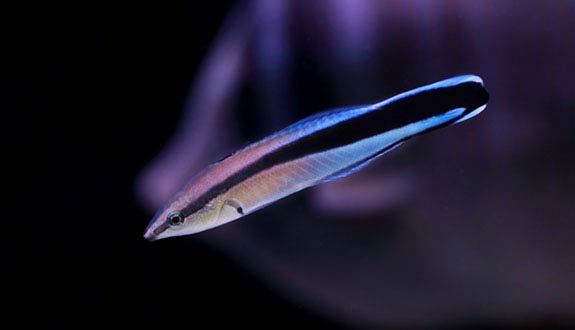 The female is slightly smaller than the male (about 2 cm or 0.8")

The Bluestreak cleanerfish is carnivorous. Particular care should be taken to ensure that the proposed foods are adapted to the size of their small mouth. You can give it many small live or frozen prey: krill, mysis, artemia, red daphnids. If you want to distribute a mussel, bloodworms or tubifex, chop them finely before distribution. Finally, the cleaner labre also accepts dry or freeze-dried food.

What kind of behavior does the Palette Labroides dimidiatus have?

This fish is sociable and peaceful. In general, it is calm: it swims not far from the rocks, where it flees at the least danger. At night, it wraps itself in a cocoon of mucus and goes to rest in its cave (always the same one). 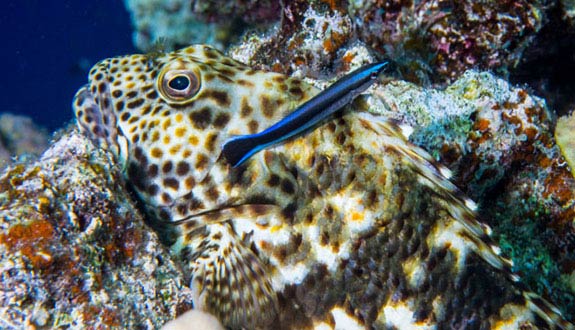 Because of its diet, it is very inclined to install a «cleaning station» for other fish: it rids them of their parasites, and it fills its belly. It invites the big fish to approach by performing a characteristic «dance», cutting with the rest of the usual swimming. At this sign, the fish can come to “take a shower”.

In its natural environment, the Bluestreak cleanerfish grows into a large group, then separates later from the group to finally live as a duo or harem (a male for several females). In captivity, it is better to adopt only one Bluestreak cleanerfish per aquarium. Indeed, as an adult, it does not support the presence of its congeners. The only exception to this rule will be when a couple is formed.

Feel free to introduce this fish in large, well populated aquariums. Indeed, not only will it be able to find its pittance easily given the choice of roommates to “clean”, and in addition it will prevent him to harass only 1 or 2 fish that will eventually run away, even jump from the tank or bump against the windows.

Indeed, even if it is very useful in its natural environment for its functions of cleaner, in a closed space like an aquarium, the Bluestreak cleanerfish can even hurt its guests. The victims will then seek to flee the Bluestreak cleanerfish by all means. This situation is often encountered with tetraodontiform fish such as the puffer fish (Tetraodontidae and Canthigaster), porcupine fish (Diodontidae) and chitterfish (Ostraciidae). It will be necessary to avoid these associations.

Finally, pay attention to the predation of scorpion fish (Setarchidae) towards the Bluestreak cleanerfish.

The male and the female wishing to breed launch themselves in pursuits. Following these events, spawning occurs in open water. It has already been observed several times in the aquarium. 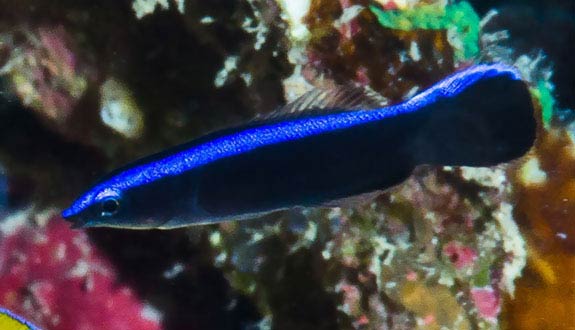 The juveniles are uniformly dark in colour, with a dark blue band, very bright and luminous, running throughout the upper body.

Surprisingly, all juveniles are females (hermaphrodite, protogynous, monandric). In the wild, if the male disappears, the dominant female can change sex to become a male.

An aquarium decorated with rocks will be very well suited for a Bluestreak cleanerfish. To best mimic its natural habitat, simulate a reef wall (or pit) with many nooks and hiding places, all on a beautiful height However, be careful of the stability of your stacks to prevent landslides! Plan hiding places at its size. Indeed, the Bluestreak cleanerfish always tries to rest in places adapted to its size: neither too big nor too small. It will choose a place that suits him and will make its final home!

This fish is an excellent jumper! Do not forget to cover your aquarium and protect your lighting system. 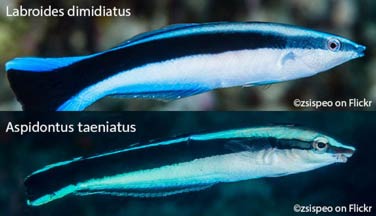 The acclimatisation of the Bluestreak cleanerfish is a delicate point. For example, the fish may refuse to feed for a certain period of time. You can help itregain a good appetite by starting to propose a mold with its valve (shell). This choice of food has been successful with many aquarists. After this difficult moment, it is quite robust.

The Bluestreak cleanerfish’s family includes 70 genera and more than 500 species!