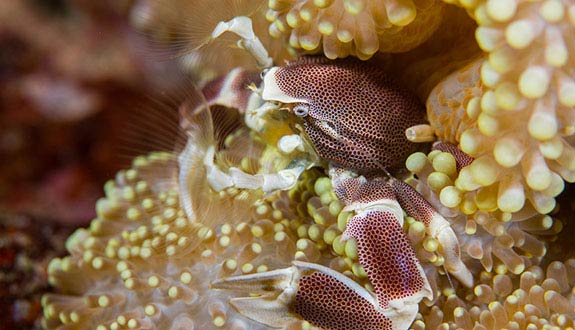 Origin: Southern Pacific Ocean and Indian Ocean
Biotope: always lives in the tentacles or at the edge of the oral disc of an anemone, close to the surface 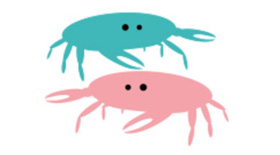 The male is larger than the female. 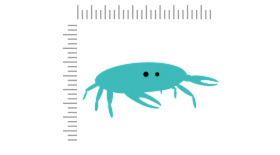 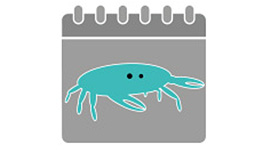 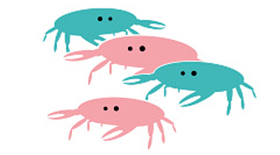 How to feed the Squat anemone shrimp?

How to feed the Squat anemone shrimp? 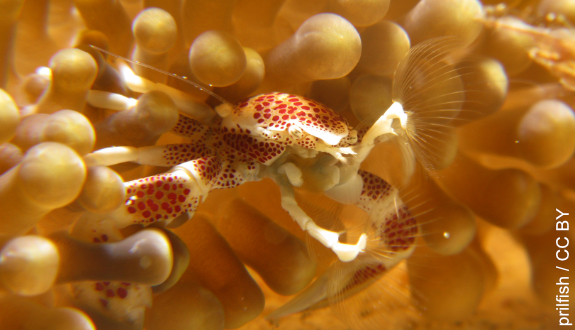 Anemone Crab are filter feeders that have a pair of legs dedicated to their feeding (they have some kind of fans that allow them to capture suspended particles). Feed your crab with plankton, but it will also accept fine fish food as a supplement.

What kind of behavior does the Palette Squat anemone shrimp have?

What kind of behavior does the Squat anemone shrimp have? 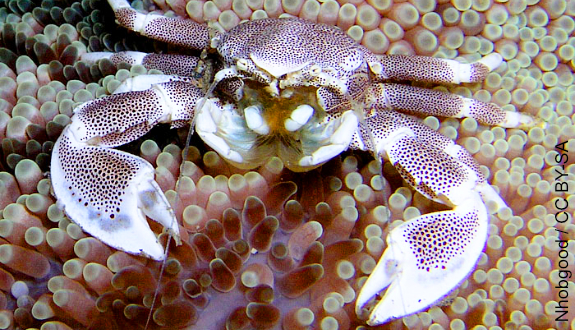 This crab never leaves its host anemone. Generally, each crab has its own anemone, except during the breeding season when the couple will take up residence in the same anemone. If the number of anemones is not sufficient, they can live constantly as a couple in the same large anemone because they are calm and sociable crustaceans.

Who can live with the Lysmata?

Who can live with the Squat anemone shrimp?

The presence of large, well-developed anemones is mandatory for its proper maintenance. Note that this is not a symbiotic relationship (in which each species takes advantage of the presence of the other) but rather a carposit (only one of the species benefits from cohabitation): the anemone protects the Anemone Crab from predators but does not benefit from its presence. However, the crab does not harm its anemone.

Given its lifestyle in a natural environment, maintenance in pairs is ideal. Be careful because two specimens of the same sex do not support each other (this is particularly true for females which can be quite aggressive in them). At the time of your purchase, do not rely on the size which can sometimes mislead you (females are a little larger than males, but this is valid for perfectly adult crabs). Take rather 2 crabs cohabiting in the same anemone: it is sure that it is a couple!

As a refuge, each crab will ideally have its own anemone (but one may be enough for an established couple). You can install them with Heteractis, Stichodactyla or Entacmaea. In aquariums, the crab can also be satisfied with Rhodactis but with less enthusiasm.

This crustacean does not pose any problem of cohabitation because it is simply ignored by fish and Hermit Crabs when it is in an anemone. Beware all the same of the competition from clownfish which can compete with the host anemone to the detriment of the Anemone Crab.

How to breed the Squat anemone shrimp?

How to breed the Squat anemone shrimp?

Which aquarium for the Squat anemone shrimp?

Which aquarium for the Squat anemone shrimp?

This species of invertebrate will find its place in a reef aquarium composed of rocks, corals and anemones. Maintain a calcium level between 360 and 450 mg/liter to allow it to develop properly. Also make sure to keep a sufficient level of iodine and magnesium.

Robust and easy to maintain, the Anemone Crab can be maintained by a beginner aquarist. However, note that like all invertebrates, it does not like too wide variations in water parameters.

These crabs have a pair of legs specialized in feeding: they are real plankton nets! Another very useful pair: the one located the furthest back, quite high, with which the crab can maintain its carapace.

It owes its name "porcelain" because of its smooth carapace strewn with patterns, reminiscent of a beautiful ceramic.

Their family, the Porcellanidae, includes more than 240 species. 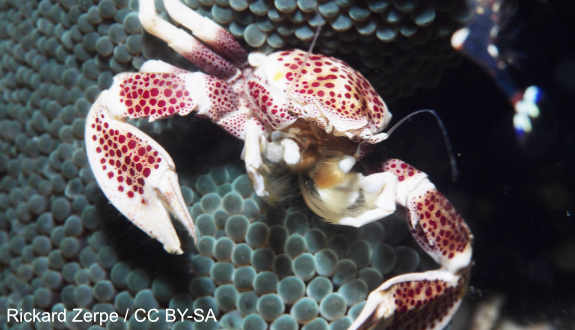