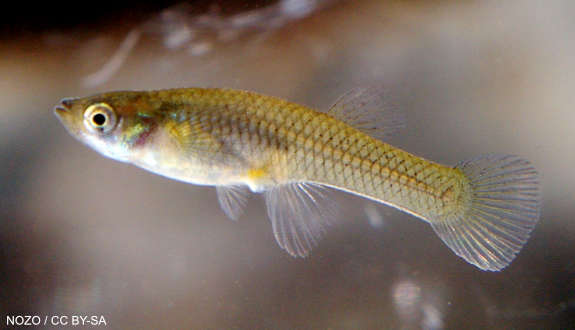 Females have a rounder belly and have a black abdominal spot that is absent in males. The latter are significantly smaller and have a gonopod.

How to feed the Mosquitofish?

How to feed the Mosquitofish?

In its natural environment, this fish mainly eats mosquito larvae. Nevertheless, it remains an omnivorous fish. In aquariums, these small fish will adapt very well to conventional commercial foods as long as they are adapted to the size of their small mouths. However, vary the meals as much as possible by also offering mosquito larvae, daphnia or mud worms.

Ideally, these fish should be fed once in the morning and again in the late afternoon. Feed small amounts per meal (everything should be eaten within two minutes).

What kind of behavior does the Mosquitofish have?

What kind of behavior does the Mosquitofish have?

The Gambusie has a developed gregarious instinct and will prefer to live in a shoal. In terms of relations with its congeners, it is best to start with 3 females for every male. Indeed, males are constantly chasing females to reproduce. If a female is alone with a male, she may well die of exhaustion. Having several females for each male helps dispatch all that energy. High plant density also provides hiding places for females. Finally, note that the males are quite aggressive with each other.

Who can live with the Mosquitofish?

Who can live with the Mosquitofish?

The Mosquito Fish is generally peaceful and not very concerned about other species in its habitat. However, they have at times shown aggressive and belligerent behaviour towards other fish. For this reason, specific aquarium maintenance is highly recommended. In community aquariums, prefer robust species to accompany it.

Beware, of course, of the predation of large species.

How to breed the Mosquitofish?

How to breed the Mosquitofish?

Like many members of his family, reproduction will not be a problem. If male and female are in the presence of each other, then fry will arrive sooner or later!

The peak breeding season is from April to October. The male pursues the females and fertilizes them with his gonopod. The female can store the male's semen for several weeks and have 3 to 5 litters even if she is isolated from her mate.

This species is ovoviviparous, meaning that the eggs develop inside the female's body. This stage will last 4 weeks. Then the female gives birth to perfectly formed fry. They can be from 10 to 100 fry per female (on average between 10 and 15).

There is a very high parental predation on the fry and the plant cover will not be enough to take the young fish away from their parents' appetite. If you wish to ensure the survival of the young, it is imperative that you isolate them. You have two options: either isolate the pregnant females in a small aquarium and after birth reintroduce them into the main tank, or fish the young fry very soon after birth to isolate them. Return the young fish to the main aquarium when they have grown large enough not to be eaten by their parents.

Which aquarium for the Mosquitofish?

Which aquarium for the Mosquitofish?

This tiny force of nature can adapt to almost any freshwater condition (and sometimes even brackish water)! In fact, it can live perfectly well in an outdoor pond all year round. But for the sake of the species' comfort, let's not go to extremes.

It can be satisfied with a 50 litre / 11 Imp Gal / 13 US Gal tank at first, but keep in mind that its rapid reproduction may require you to move them to a larger aquarium to avoid overpopulation.

The Gambusie appreciates well-planted aquariums with surface plants. It prefers calm water (break the current in your aquarium by directing the filter discharge towards a wall). Apart from that, it is not demanding on the layout of its habitat. 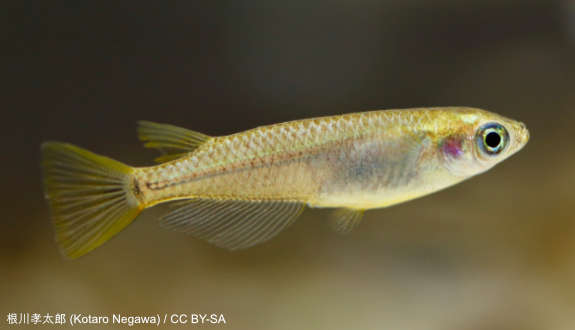 Very easy to maintain (or even indestructible :) ), it is THE ideal candidate for beginners in aquaristics.

Particularly robust, it is a cousin of the famous guppy (Poecilia reticulata). Even if it is less colored, it is much stronger than its parent. Note the possible hybridization with the Guppy.

This species has been introduced in many parts of the world in order to fight against the proliferation of mosquitoes and thus the diseases they transmit (hence its name mosquito fish). Unfortunately, this benefit can also locally unbalance ecosystems and harm local fish populations. Therefore, these fish should never be released into the wild.

Its upward-facing mouth has many small teeth.

Not to be confused with its close cousin Gambusia holbrooki (eastern mosquito fish). They are distinguished from each other by a slight difference in size, a different gonopod (first serrated ray for G.holbrooki), a different number of rays on the dorsal fin (7 rays for G.holbrooki compared to 6 for G.affinis) as well as the presence of larger dark spots in G.holbrooki than in G.affinis.

Its name "gambusie" comes from a Cuban word for something of little value, of no importance. The Cubans have given this name to this rather dull species, which is found in large numbers in this part of the world. Fishermen are sometimes overrun with this fish, which is not edible, to their great regret.