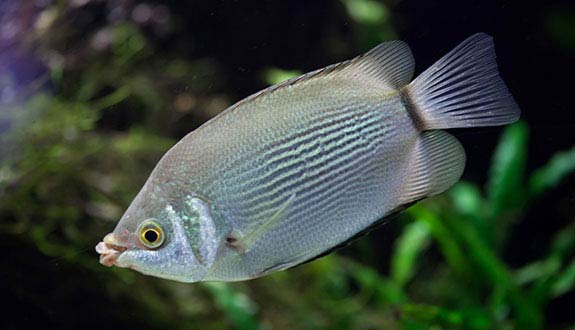 Visible only as an adult. Females are slightly rounder than males.

How to feed the Kissing fish?

How to feed the Kissing fish?

This gourami is an omnivorous fish with herbivorous tendencies. Interestingly, it particularly likes seaweed, even if it does not scrape the decoration to eat it (it is physically not adapted for that). Vary its menus as much as possible to ensure good health. He has a big appetite and seems elusive!

For the meat part, distribute rotifers, aselles or artemia. For the vegetable part, offer fresh vegetables such as lettuce or poached spinach.

What kind of behavior does the Kissing fish have?

What kind of behavior does the Kissing fish have?

This fish has a rather lively and active temperament. However, it remains peaceful, sociable and non-territorial.

Gregarious, it needs the presence of at least 5 of its congeners (which makes a group of 6 specimens) to develop a natural behaviour in captivity. There is a peak of activity in the evening and at night.

Who can live with the Kissing fish?

Who can live with the Kissing fish?

There are no restrictions on cohabitation, as long as sufficient living space is provided for these large gregarious fish. They will associate with all fish that are not too small (beware of the risks of predation, although limited in this case) and that their sometimes intense activity will not disturb.

It should be pointed out that some individuals can show extremely aggressive behaviour, going so far as to kill all their roommates quickly. This remains a rather rare special case.

How to breed the Kissing fish?

How to breed the Kissing fish?

Quite difficult, the reproduction of this species among amateur aquarists is rarely achieved.

Unlike many gourami, the kissing male does not build a nest of bubbles.

In order to guarantee the survival of the fry, plan an aquarium especially dedicated to breeding. The volume will be at least 200 litres. Equip it in the classic way and install floating plants on the surface (Ceratopteris for example). The temperature should be around 25°C (77°F) and the pH at 7.

Isolate a couple that has already laid eggs in the main aquarium in this aquarium. Spawning takes place in open water and is a bit turbulent. After its events, the eggs are released and rise to the surface. They will then strand on the surface plants. You can also retrieve the eggs after spawning in the main tank and place them in the rearing aquarium.

Feeding the fry: initially, the fry will consume their yolk sac for 5 days. Then move on to artemia infusers and nauplias.

Which aquarium for the Kissing fish?

Which aquarium for the Kissing fish?

In the wild, the Kissing Gourami lives in ponds and slow-moving rivers. In an aquarium, reproduce this by installing a very gentle current, or even none at all in its living area (middle and top). To limit the current, you can, for example, "break" the filter discharge by directing the rod towards a wall of the aquarium. Be careful, however, because this fish is a big polluter. Filtration must still ensure that the water quality is maintained. It will therefore be necessary to find a balance between a sufficient flow to clean the water and a current that is not too strong.

Abundant vegetation will be appreciated. However, this fish likes to swim unhindered. Provide large swimming areas that are free of any scenery so that it can exercise. To do this, plant your plants on the bottom and sides of your aquarium instead. Dim the lighting with many floating plants that will keep your fish safe. Finally, choose sturdy plants because this gourami will not resist nibbling on the tender leaves.

Their name "kissing gourami" comes from their youthful behaviour. Indeed, young fish (often males) stick together mouth to mouth. Far from being a sign of affection, this behaviour would rather appear during parades, or even ritual confrontations (let us note that this remains a theory). The goal is to evaluate the strength of the opponent and to establish a stable hierarchy in the group. Adult fish often lose this habit.

Globally robust and adaptable, this species can be adopted by beginner aquarists.

In the wild, the Kissing Gourami lives in stagnant water, therefore very calm waters with little oxygen. In order to survive in these conditions, it has developed an additional breathing organ: the Labyrinth. This organ allows him to breathe the air on the surface when necessary.

Its coloration varies according to their origin. In the wild, this fish is grey. The selected forms encountered in aquariums are light pink (xanthochromic form) in most cases but it can also be green (Thailand) or cream (Java).

In its natural environment, it can reach 30cm (11.8")! (and even 56 cm according to Smith, 1945). In aquariums, it rarely reaches this size, even in large aquariums. Moreover, its natural colour is more grey than pink.

Did you know that some people around the world appreciate it for its tasty flesh?