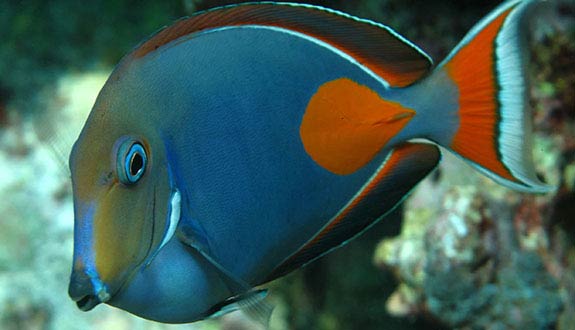 How to feed the Achilles tang?

How to feed the Achilles tang?

Acanthurus achilles is mainly vegetarian. It finds part of its food directly in the aquarium by consuming filamentous green algae. However, this is not enough to satisfy this big fish.

It often suffers from vitamin A deficiency. Do not hesitate to rely on dietary supplements to prevent such deficiency.

What kind of behavior does the Achilles tang have?

What kind of behavior does the Achilles tang have?

This Achilles tang is emotional and easily stressed. This makes him sometimes aggressive depending on your population (see "cohabitation"). However, he has character and will probably be one of the dominant fish in your aquarium.

It is an active fish that swims constantly.

A tireless algae grazer, it will spend most of the day scouring the aquarium for filamentous green algae.

When night comes, it will place itself in a hole to feel safe. Note that its color may fade during the night to be as little visible as possible.

Who can live with the Achilles tang?

Who can live with the Achilles tang?

He will be the only occupant of his species in an aquarium, regardless of its size. Indeed, in captivity, the Acanthurus achilles is very aggressive with its congeners and does not tolerate their presence (contrary to its condition in the wild where it can gather with its fellow creatures). In general, avoid associating it with any other surgeon fish (Acanthuridae) with which it has bad relations. This type of cohabitation may be attempted (without guarantee) in volumes exceeding 1500 liters / 300 Imp Gal / 400 US Gal !

Be also careful with the presence of large-sized fish with strong temperament in its territory. Indeed, this can induce dominance problems or generate injuries.

On the other hand, you can associate it with large, peaceful fish, or fish of the same size and temperament as its own. If he shows aggressiveness with such species, it is probably because the aquarium is too small for all these small people.

Cohabitation with corals is not a problem because he does not touch them. On the other hand, it will lead a hard life with filamentous algae in formation: an indisputable asset!

How to breed the Achilles tang?

How to breed the Achilles tang?

No protocol to date.

Which aquarium for the Achilles tang?

Which aquarium for the Achilles tang?

This Surgeon will perfectly find its place in a reef aquarium, where the quality of the water must be irreproachable. Thus, you can install a decor composed of rocks and corals, while leaving enough room for him to swim without constraint. Install a strong current.

Difficult to confuse this Surgeon with others so much its big red or orange spot (according to the geographical distribution) on its tail is distinctive of the species! But did you know that this color has another function? That of highlighting to everyone the presence of a sharp scalpel at the base of the tail (hence its name "Surgeon's Fish"). You have been warned!

This fish is quite sensitive to acclimatization and variations in water parameters, which makes it rather reserved for experienced aquarists. The Acanthurus achilles can take a long time to recover from such a change (more than a month). The risk of cyanide fishing is also quite high with this species (it involves poisoning the fish with cyanide in order to stun and capture it) and it may die quickly without anything being done to save it. To avoid this, find out where your fish comes from when you buy it, and if it is of wild origin (which makes it even more difficult to acclimatize) how it was caught.

The Acanthurus achilles is a rather fragile fish that shows a great vulnerability to ectoparasites (it is easily prone to white spots).

Beware of cohabitation with Acanthurus nigricans because the two species can hybridize.

In the subfamily of Acanthurines (true surgeon fish), there are about 55 species divided into 3 genera. The genus Acanthurus is the most important with 36 distinct species.