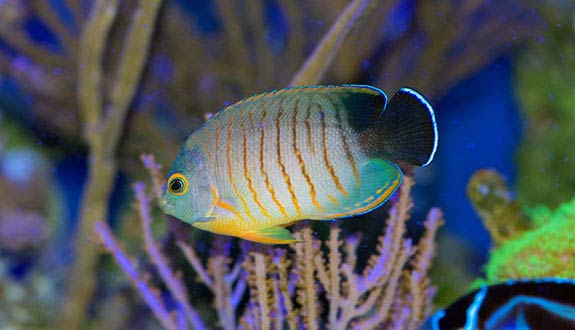 the male is taller and more slender than the female. Its colors are also brighter and more vivid

How to feed the Eibli Angel?

How to feed the Eibli Angel?

This species is omnivorous with vegetarian tendencies. Thus, for its balance, you will offer it both a fresh or dry vegetable part (broccoli, spinach, lettuce, Nori seaweed, spirulina...) but also a meat part with small fresh or thawed prey (chironomid larvae, enriched artemia, mysis, tubifex, krill and chopped mussels...).

Given its intense activity, this fish has a big appetite. Do not hesitate to feed it several times a day (at least twice a day) with small quantities.

What kind of behavior does the Eibli Angel have?

What kind of behavior does the Eibli Angel have?

This species is one of the calmest and most peaceful Centropyges provided the aquarium is sufficiently spacious.

It likes to move close to rocks that will make it very secure: at the slightest fright, you will see it gracefully sneaking through the holes in the wall! He is an active swimmer who is always on the move.

Who can live with the Eibli Angel?

Who can live with the Eibli Angel?

In the wild, this fish is organized in a very hierarchical group, which is why the maintenance of several individuals in the same aquarium can sometimes prove to be delicate. However, considering the good character of the Centropyge Eibli, you can consider keeping several individuals in an adapted aquarium (volume of at least 1,000 liters/ 220 Imp gal / 265 US gal, rich decoration in stone...). Compose your group in harem of one male for 2 females at least. The cohabitation with other Centropyge is possible as long as the pattern of their dress is different and that the proposed volume is sufficient (at least 800 liters / 180 Imp gal / 210 US gal). For a better chance of success, introduce them at the same time in the aquarium.

Extra-specific relationships are also very good, because the Centropyge Eibli does not care about its roommates and rarely shows aggression when properly maintained. This is also the case with newcomers with whom it is quite tolerant. However, if cohabitation problems should appear, it will be especially with smaller shy fish or on the contrary too shy. Therefore, prefer medium-sized fish with a peaceful temperament.

Beware of cohabitation with some invertebrates (even if in this respect, this Centropyge is one of the least dangerous for your corals). For example, the Centropyge can attack tubeworms and clams. However, the larger the aquarium, the more anecdotal the problem will be. However, it should be noted that this is a sign of a poor diet: to reduce this behavior, vary the menus and take food supplements!

How to breed the Eibli Angel?

How to breed the Eibli Angel?

Quite difficult to achieve for individuals given the volume required. Indeed, a breeding group must have one dominant male for every 2 to 6 mature females. However, professionals manage to breed them, from spawning to the maintenance of the larvae.

The pattern of juveniles is identical to that of adults except for one detail: the older the fish, the blacker its tail!

Interestingly, like all Centropyges, these fish are protogynous hermaphrodites, meaning that they are all born female. Some of them will become males if necessary (most often, it is the largest female of the group if the dominant male disappears).

Which aquarium for the Eibli Angel?

Which aquarium for the Eibli Angel?

The ideal aquarium consists mostly of stone forming caves, holes, gaps and shaded areas. This will make this easily frightened fish very secure. Complete your decor with filamentous green algae, which will be part of his daily diet.

This good swimmer will appreciate a good stirring and a fairly strong current.

Most of the time, this species of Centropyge will not damage your corals.

Very robust and easy to acclimatize, the Centropyge Eibli is a perfect candidate to start in marine aquarium keeping. It should be noted however that it is quite sensitive to skin infections.

At the time of your purchase, observe your future resident: his skin must be healthy and without injury. He must also show his good health and swim all the time.

There are 32 species of Centropyge (or dwarf angelfish), which makes it the best represented genus of their family, the Pomacanthidae (or angelfish), with 88 species in all.

Hybridization is possible with the Centropyge flavissima.