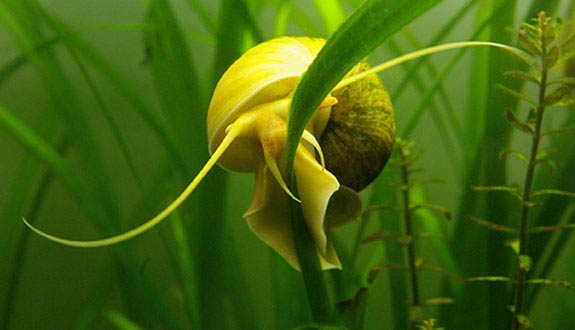 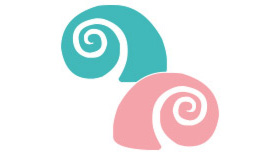 The antennas of the female are longer 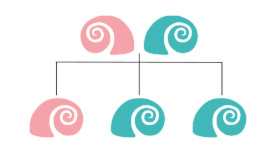 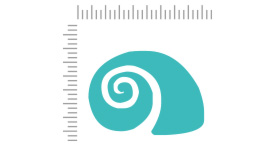 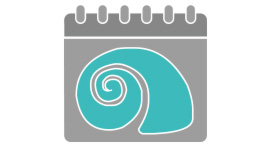 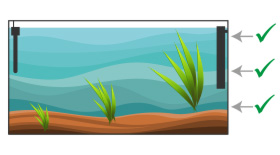 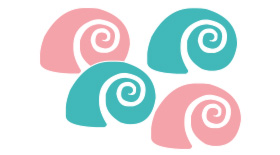 How to feed the Apple snail?

How to feed the Apple snail?

Snails omnivorous and excellent cleaners: they are very voracious, even a little too much! Thus, they will feed on seaweed, surplus food, dead fish...

Pomacea Canaliculata also consumes all the plants contained in your aquarium, in which it can make a real carnage. Pomacea Bridgesii will save the plants in good health.

What kind of behavior does the Apple snail have?

What kind of behavior does the Apple snail have?

Channeled Applesnails are peaceful and calm, but they are cleaners! Thus, they may attack weakened fish.

During the day they remain among the surface aquatic plants. If they have the opportunity, they will go out on the dry land overnight. Moreover, they are mostly active at night.

You will see them most often evolve on the "solid" elements of your decoration, like the roots or the windows, because they are too heavy for the leaves of the plants.

Even if they can live alone, their behavior will be more natural and more interesting from 5 or 6 individuals (provide an aquarium of at least 120 liters / 26 imp gal / 32 US gal). 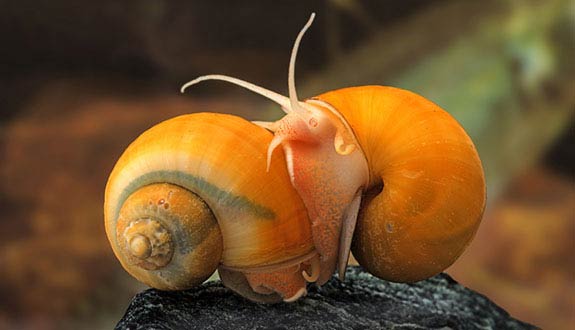 Who can live with the Apple snail?

Who can live with the Apple snail?

Attention to cohabitation with their natural predators: tetraodons, botias, loaches, crabs, some shrimps...

Some fish can also harass them by trying to nibble their beautiful antennae, which will push the mollusks to stay in "defensive" mode for a long time, remaining constantly in their shell, antennas retracted and moving only very slowly. These snails are very stressed and end up dying prematurely. For its reasons, avoid especially cichlids.

They can coexist with small peaceful fish like Ancistrus, Apistogrammas, Colisas, Firehead Tetra...

Note that Channeled Applesnails are very good egg eaters, and it will be difficult or impossible to keep ponds in an aquarium containing these molluscs.

How to breed the Apple snail?

How to breed the Apple snail?

These aquatic snails are not hermaphrodites. It takes the presence of a male and a female for reproduction to be possible.

They reach sexual maturity when they measure about 2.5 cm or 1 inch.

To promote breeding, you can increase the temperature by 5°C, make a large change of water and give food abundantly after a week of fasting.

The fertilized female will lay Its eggs out of the water, mostly on the lid of the aquarium. The eggs form a cluster. Spawning can range from 100 to 600 eggs, which will incubate for one to three weeks depending on the temperature.

At hatching, the young snails will consume the rest of the egg, which will bring them minerals essential to the hardness of their shell. They are identical to adults and do not require special treatment from the aquarist.

Predation of fish can be a good thing because these snails are very prolific, and you could quickly find yourself invaded, especially that their breeding and sale is now prohibited (see "Good to know").

Which aquarium for the Apple snail?

Which aquarium for the Apple snail?

These molluscs are big polluters, so a minimum of 60 liters (13 imp gal / 16 US gal) for an individual is preferable. You can put 5 or 6 Channeled Applesnails in a 120 liters (26 imp gal / 32 US gal) aquarium. Also choose a powerful filtration and make water changes very regularly.

To avoid breakouts, cover your aquarium. However, do not fill your aquarium fully and leave a space of at least 10 cm or 4 inches between the water surface and the lid. The Channeled Applesnail can breathe and get out of the water when it feels the need.

The ideal maintenance temperature is around 20 to 25°C or 68 to 77°F. Indeed, even if the Channeled Applesnail bear a wide range of temperature, the extremes are to be avoided: too cold water will significantly slow the activity of the mollusk, while too hot water will do the opposite, pushing it to an intense activity that will shorten its life.

Prefer a slightly hard water to ensure the strength of their shell. If this is not the case (GH below 15), offer them a dry bone that they will eat and that will bring them the necessary elements for the constitution of a good shell. Submit this bone once or twice a week, immersing it an hour in the aquarium.

How to differentiate Pomacea Canaliculata from Pomacea Bridgesii? 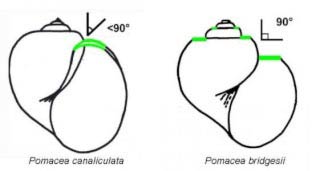 These snails are often sold as "cleaners", which is partly true. But they themselves produce a lot of waste, especially in adulthood, so they will not necessarily be of great benefit to the aquarist.

These snails have 2 respiratory systems: gills to breathe under water, and a lung to live emerged at night.

It can completely lock itself in its shell and close it with a solid operculum that it folds behind him. Moreover, if your snail has escaped from the aquarium and you find it several days later out of the aquarium, it can be alive if this operculum is closed, do not throw it!

Channeled Applesnails need an annual hibernation. For this, they burrow entirely in the ground, it is important not to disturb them! (If you want to know if they are still alive, see if the operculum is still closed). Hibernation lasts from a few days to several weeks. When they wake up, offer them food because they will be very hungry! If they can meet this need, they will live much longer!

A European directive bans the import, breeding, distribution and sale of snails of the genus Pomacea since 8 November 2012, because it is considered invasive, especially in Spain.